The Julie Ruin at the Mod Club 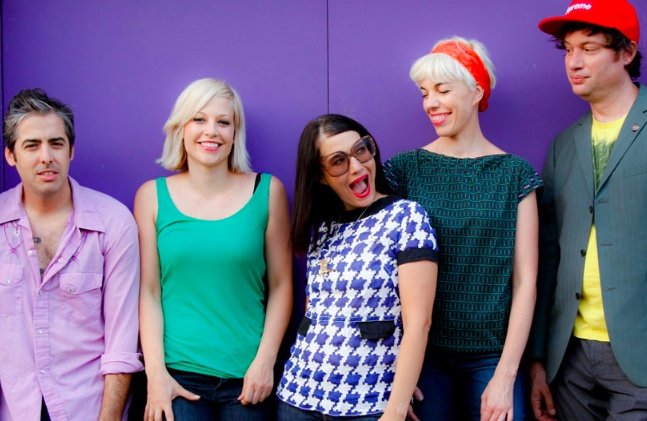 The last time she played Toronto was 10 years ago with Le Tigre, a high-energy trio of sparkly suited feminist/queer pop infiltrators. Now fronting the five-piece band The Julie Ruin – a project that she’s used to shift her songwriting focus from overtly political to more personal concerns – her onstage vibe veers toward the corny and self-effacing humour of a performance veteran.

The 75-minute set mixed cuts from The Julie Ruin’s Run Fast album with covers of Bikini Kill, Le Tigre and Hanna’s 1997 Julie Ruin solo album, and was heavy on wry, improvised banter that the crowd ate up.

“I’m from the time of Dr. Quinn Medicine Woman,” she deadpanned to a 21-year-old fan at the foot of the stage. A flubbed lyric during Bikini Kill’s This Is Not A Test led to a story about starring in an awful elementary school Annie/Oliver hybrid play as a child. She also solicited names for an art show about comedy she is overseeing as guest curator for Calgary’s Sled Island festival (Funny Bone is the current frontrunner).

Meanwhile, Hanna either did not see or did not acknowledge a banner dropped by trans activists asking her to address the Michigan Womyn’s Music Festival’s policy against admitting transgender women. The stunt seemed to go unnoticed by many in the crowd (including this writer), but was a reminder that her toughest critics sometimes come from within her fanbase.

Banter and politics aside, The Julie Ruin brought robust energy to the stage that Hanna matched with equally clear and forceful vocal delivery.

The back catalogue covers rarely sounded as tight and together as the new songs, even though Run Fast is more ambitious in scope than Hanna’s older material. Frisky pop numbers like Oh Come On and Cookie Road have wild, spastic vocals and keyboard parts, but slick, new wavey guitar solos and rubbery bass lines kept them grounded.

That same balanced musical dynamic reflected in the players onstage. The detached poise of guitarist Sara Landeau and bassist Kathi Wilcox played off Hanna and keyboardist Kenny Mellman, whose jokey rapport was one level down from bickering married couple.