The Knife at Kool Haus 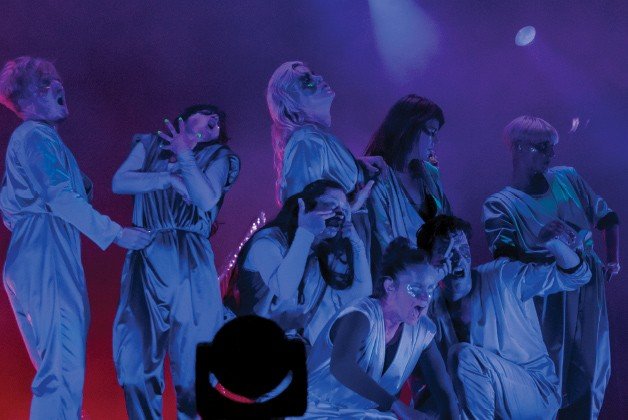 Imagine buying a $200 Beyoncé ticket only to realize that she had rendered herself near-anonymous onstage – part of a troupe of similarly be-sparkled singers and dancers. Imagine she never explicitly identified herself, though you were able to pick her out when she sang her lead vocal parts from a shadowy platform at some far-flung corner of the stage, while the dancers drew your eye at centre stage. Imagine your horror as Beyoncé silently danced behind another dancer who was lip-synching to a pre-recorded vocal track of one of her hits. Imagine her band pretending to play their instruments to the same track.

Now imagine Swedish brother-sister duo The Knife (and a significantly lower ticket price) instead, and you might be able to picture the effect of their ingenious Shaking The Habitual Tour – a satirical mashup of an arena-sized pop show and experimental modern dance theatre.

On last year’s Shaking The Habitual album, Karin Dreijer Andersson and Olof Dreijer composed music that mirrored the leftist, feminist and queer theory ideas that inform their lyrics. That resulted in blowing apart the traditional pop-song structure that served them well on hit singles such as Pass This On and Heartbeats in favour of electro-acoustic ambience, complex rhythms and churning, acid bass lines. No longer “pop infiltrators,” they produced an album that was resolutely anti-commercial.

It’s not unlike what Kanye West intended with his abrasive Yeezus album and subsequent concert tour, during which he confounded fan expectations by covering his face with designer masks for nearly the entire show.

The Knife have done the mask thing to death, so this time around, they went a step further and removed themselves as the focal point of their own concert. As such, an audience member’s ability to participate and lose themselves in this experience depends on how open-minded they’re willing to be.

How did the Toronto audience fare? So-so. Not enough people participated in the warm-up act. Led by performer Tarek Halaby, the hilarious attempt to rid the room of self-consciousness was based on dance artist Miguel Gutierrez’s D.E.E.P. Aerobics routine and involved equal amounts rock-show crowd-baiting (“I CAN’T HEAR YOU!”), body consciousness talk (“I can hear you”) and Richard Simmons-worthy histrionics.

After launching the show in Europe last year, The Knife tweaked the experience for North America. The staging resembled a DIY version of the typical pop-star set: a series of raised platforms for the various instruments and two staircases leading up to them on either side.

This version of the tour also placed greater emphasis on live singing. Dreijer Andersson was the primary vocalist, and was frequently joined by other members of the troupe, which included Light Asylum’s gravelly voiced Shannon Funchess.

The show opened with an arresting tableau of the group cast in rainbow-lit silhouette, banging away at various percussive instruments to the solemn Wrap Your Arms Around Me. It was a definite comedown after Talaby’s high-energy agitprop and set an unsettling tone.

No matter how glittery and gay they might look outwardly, the Knife’s music and visuals throb with dark undercurrents hinting it ominous forces. Dreijer Andersson’s voice certainly adds to this effect. Its creaking, moaning quality perfectly complemented the alluring creepiness of ambient slow-burner Raging Lung.

From there, the show morphed into what resembled a Dionysian YSL candy rave (if you can imagine such a thing) and the focus gradually moved to the interpretive-dance action at centre stage.

Added bass lines gave the lightning-quick rhythms on Without You My Life Would Be Boring a more overt groove. Older songs One Hit and Pass This On received similarly warp-speed acid treatments. We Share Our Mother’s Health gradually built from hand-claps and atonal screeching into a whirring techno frenzy as the group stood stoically, flanked by geometrically arranged pink lasers.

The choreography’s flailing uninhibitedness stood in contrast to the rigorous professionalism of the sound, lighting design and brilliant staging. It served the show’s themes of collectiveness and consciousness, but was not as memorable as the other elements.

At the end, the troupe disappeared save for Funchess and Dreijer Andersson, who screeched and wailed through a riveting rendition of ravey protest anthem Stay Out Here. The pulverizing beats continued into Silent Shout as the troupe returned and ended the show as they began it: silhouetted by rainbow light, but this time dancing wildly.

Ultimately it was refreshing to see a pop group espouse queer, feminist and progressive politics in front of a mixed crowd without irony. It’s rare to see dance and music furthering unabashedly political ideas in humorous and galvanizing ways in any medium – let alone at a pop concert.