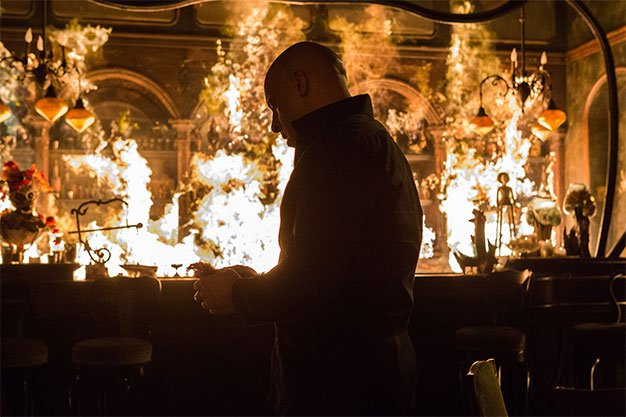 The Last Witch Hunter is a movie in constant conflict with how ridiculous it is, and how enjoyable it could be. It needs to go over the top, but won’t even look up.

Breck Eisner’s dopey fantasy adventure stars Vin Diesel as Kaulder, an immortal warrior who maintains the delicate balance of power between humans and witches in present-day New York City. (He was cursed with eternal life by the Witch Queen during the Black Plague – which, it turns out, was her attempt to wipe humanity off the planet.) When a sorcerer (Ólafur Darri Ólafsson) sets a new apocalypse in motion, Kaulder must reach back into his own past to find out what’s really going on.

This is exactly the sort of picture that needs the self-aware silliness of a Nicolas Cage – and Cage basically did this in The Sorcerer’s Apprentice a few years back. While Diesel’s comic timing is pretty good, he’s just too self-serious to play with the material in a way that would bring this film to life.

It’s much more interesting to watch Game Of Thrones alumna Rose Leslie do her own thing as a young witch who becomes Kaulder’s unwilling ally, or to see how Elijah Wood, as Kaulder’s new assistant, finds a different but complementary energy to Diesel’s in their scenes together.

Eisner’s souped-up remake of The Crazies showed impressive technical skills, but he seems entirely disengaged from the material this time around. And while the script does offer one halfway clever twist, it comes far too late to reignite my interest in watching actors outrun digital effects.