NOW MagazineMusicConcert reviewsThe Leather Uppers and the Midways at Bovine

The Leather Uppers and the Midways at Bovine 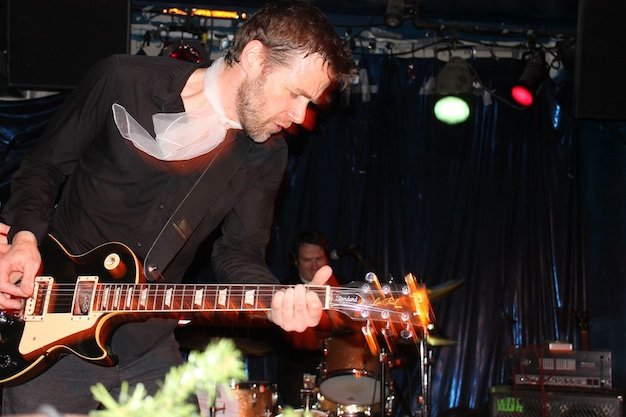 The Leather Uppers broke up in 1994 but have been playing shows off and on since 2003, so their appearance at Bovine wasn’t exactly a reunion. (They were calling it a “Christmas comeback.”) But for those of us who never got to see them in their early 90s heyday, it felt like what old days might have.

The Montreal/Toronto duo of Greg Tymoshenko (Groovy Greg) and Craig Daniels (Classy Craig) – who take turns playing guitar, drumming and singing – have that easy camaraderie that comes from a long history of making music together and hanging out since high school. Their between-song banter was as enjoyable as their fuzzed-out garage rock tunes.

Initially it seemed like they might not capture the energy of their early shows and recordings, which many of us first discovered through Canadian college radio. The minimalist, straightforward sound didn’t hit hard due to too-quiet guitar and vocals.

But the hilarious showmen, in black shirts and white scarves, built the momentum, and a string of cult favourites like Purple Nurple, Sugar Sandwich and 1000 Lashes, which they hadn’t played in Toronto in 20 years, satisfied. “What a tight ending!” joked Tymoshenko after Scream If You’re High. The occasional looseness only added to their already huge charm.

It’s an old-school trash rock sound with lots of oomph. The Toronto four-piece hadn’t played in six or seven years, so their set was more of a reunion – a high-energy and well executed one. But it was also a touch earnest, especially coming after Classy Craig and Groovy Greg.