THE LION KING music and lyrics by Elton John and Tim Rice, with additional material by Lebo M, Mark Mancina,. 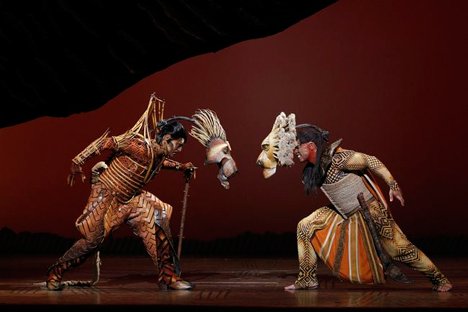 A bit of luster has come off the crown of The Lion King, which was one of the boldest, most visually inventive musicals in its day.

Granted, this is the touring version of the Disney musical and not the resident production that roared at the Princess of Wales for several years in the early 2000s. So a few of director/designer Julie Taymor’s jaw-dropping stage effects have been scaled down.

But the sets and costumes continue to be the show’s chief draw, from the famous opening number onwards, as carefully designed puppet monkeys, birds and even a big ol’ lumbering elephant come down the theatre aisles, all to the rousing strains of Brenda Mhlongo’s baboon Rafiki and the hall-filling chorus.

The original songs themselves and the pacing in the long first act, however, are tougher to sit through. The story – about young cub Simba’s reclaiming of his birth right after the death of his father Mufasa – remains the same. There’s still lots of mythic weight in that journey about letting go of childish things and fulfilling one’s responsibilities.

But many of Elton John and Tim Rice’s songs feel like unremarkable first drafts. Mufasa’s intended-to-be-inspiring ballad to his young son about his regal legacy (They Live In You) comes across as merely banal, for instance.

And maybe a decade has made us more sensitive to certain stereotypes, but the villainous trio of spotted hyenas named Shenzi, Banzai and Ed reek of paranoia about urban gangs, while Uncle Scar seems more than ever like a sinister gay predator, complete with snobby English accent. (“There’s one in every family,” says one character about Scar, in a line that obviously slipped by GLAAD.)

Still, there’s no escaping the show’s primal power in the second act. In addition to Mhlongo, stand-out performers include Syndee Winters’ proud Nala, Adam Jacobs (and his perky pecs) as Simba and Nick Cordileone and Ben Lipitz as the show’s vaudevillian meerkat Timon and warthog Pumbaa, although the book gives the latter so many fart jokes that even kids in the audience will tire of the routine.