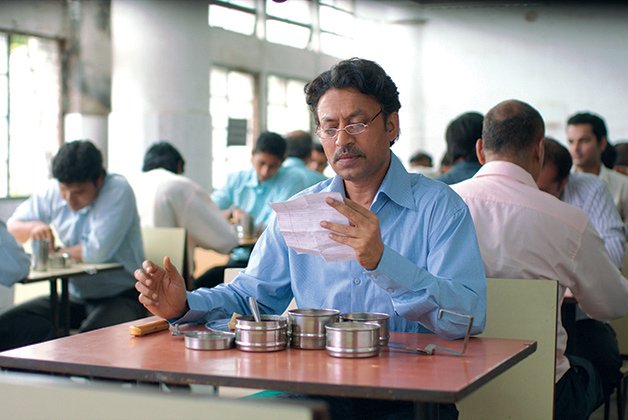 Irrfan Khan gets the wrong meal and more in The Lunchbox.

Irrfan Khan gets the wrong meal and more in The Lunchbox.

There’s a renaissance afoot in Indian cinema, with independent filmmakers like Anand Gandhi (Ship Of Theseus) chafing against the superficial, gaudy excess of Bollywood. Ritesh Batra’s charming, melancholic debut, The Lunchbox, is a sign that the movement has matured and we should all start paying attention to what India’s cooking up.

The film is built around the fanciful conceit of a mistaken lunch delivery that paves the way for two strangers to exchange handwritten letters via their meals. The home-cooked lunches Ila (Nimrat Kaur) prepares for her neglectful husband are sent through Mumbai’s dabbawalla system to the wrong recipient, Mr. Fernandes (Irrfan Khan), a standoffish accountant who’s ready to hide away in retirement.

They don’t say a whole lot in their innocent exchanges, discussing the rhythms of their day and random thoughts that hint at their emotional state. A sense of their personal lives is conveyed by suggestion, like the scents of the ingredients in a satisfying dish.

There’s romance, comedy and melodrama, but Batra deploys them gently, building a moving, sincere film around his characters. It’s an assured, affecting picture of loneliness and longing amidst modern Mumbai’s hustle and bustle.