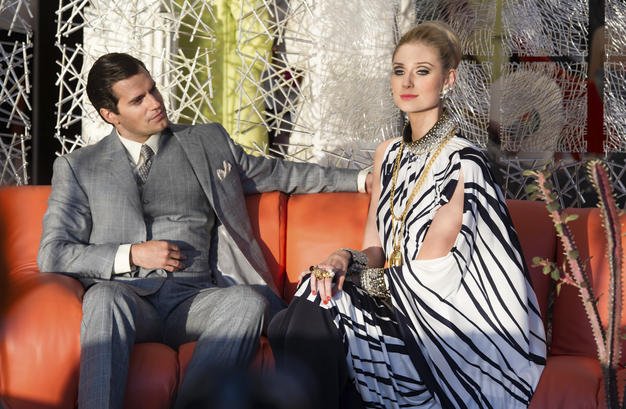 Henry Cavill and Elizabeth Debicki were cast as much for their bone structure as their ability to deliver a snappy quip.

As with most franchise launches these days, Guy Ritchie’s big-screen version of forgotten 60s TV series The Man From U.N.C.L.E. is an origin story.

It’s the early 1960s, and American superspy Napoleon Solo and his mortal enemy, Soviet counterpart Illya Kuryakin, are ordered to set aside their differences (and ideologies) and team up to tackle a nuclear threat that imperils both the U.S.A. and the U.S.S.R.

Doing this requires dashing around Europe with an East German mechanic (Alicia Vikander) and infiltrating the social circle of a pair of arms-dealing siblings (Elizabeth Debicki, Luca Calvani), for reasons that sound plausible but basically boil down to “go somewhere picturesque and wear gorgeous period clothing.”

Ritchie’s Man From U.N.C.L.E. is powered entirely by 60s mod fetishism, the actors cast as much for their bone structure and torso-to-waist ratio as their ability to deliver a snappy quip.

Cavill struggles to make Solo anything more than the same confident, louche adventurer that Robert Vaughn defined half a century ago – there’s just not much to the character – but Hammer and Vikander have a ball playing their characters’ developing attraction as the hulking, hair-trigger Kuryakin falls for the acerbic young woman with whom he’s been saddled. A simple visual joke contrasting a close-up of Hammer’s stoic face as the teeny Vikander goofs around behind him is funnier and more satisfying than anything Ritchie’s done in a decade.

The film may be too silly to satisfy action audiences (and a little too slight to get us invested in the stakes), but there’s a place for it in a world of self-serious mass entertainment. Think of it as the counter-argument to the Mission: Impossible movies’ constant attempts to roll back modern geopolitics to the Cold War days. Sometimes a cool pair of sunglasses is just a cool pair of sunglasses.