The Men – Open Your Heart 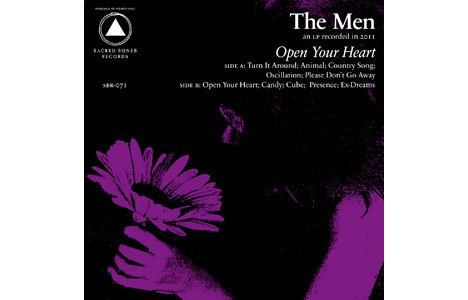 Every so often the music media pick a band to hype as “the saviours of guitar rock.” Currently that band is the Men. Guitar rock isn’t a genre that particularly needs saving – no matter how infatuated indie kids get with synthesizers, its doubtful the guitar will ever disappear from popular music – but the Men represent a return to a specific kind of rock for which the zeitgeist has been begging.

Where bands like Yuck deliver albums of throwback 90s indie rock by cherry-picking traits from Dinosaur Jr, Hüsker Dü or Sonic Youth, the Men embody that era of American underground in spirit more than fashion. Open Your Heart is a glorious mix of guitar-heavy hooks, youthful spirit and unabashed rocking out, without the knowing wink of nostalgic revivalism. It’s indie rock that actually rocks. From Brooklyn no less.