The National at Massey Hall 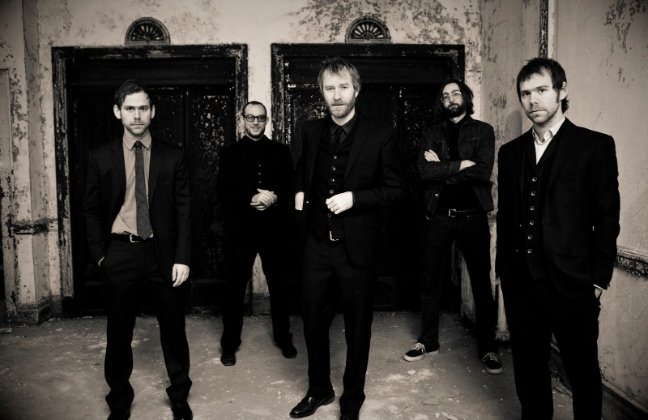 Kicking off a three-night stand at Massey Hall, The National weren’t going to let the venue’s stuffy atmosphere hinder their high-energy (read: wine-spitting, mic stand-throwing, crowd-moshing) live show. In fact, lead singer Matt Berninger gushed to the sold-out audience that the beautiful (yet seated) concert hall was home to many of the Brooklyn band’s most memorable shows. And last night’s show was one for the books, too.

The 90-minute set got off to a mild start with Don’t Swallow The Cap, I Should Live In Salt and Demons, all from 2013’s excellent Trouble Will Find Me. As the band charged through each song’s instrumental parts, with Bryan Devendorf’s precise, grinding drumming leading the way, Berninger deliberately paced around the stage, sipping a glass of white wine (it’s become his thing). But if that was Berninger getting his feet wet, he dove in headfirst for the rest of the evening.

Traditionally slower songs like Afraid Of Everyone (from 2010’s High Violet) were given a raucous electric upgrade, and Berninger’s baritone vocals were more shouty than melodic. Squalor Victoria (from their breakthrough album, Boxer), was lush with horn flourishes and an encore-worthy climactic ending.

Throughout the night, Berninger became progressively looser. He got on one knee and screamed along with the front-row fanboys, precariously maneuvered the mic stand, and handed off a bottle of wine to an audience member. Several times, roadies would come onstage between songs to readjust monitors, untangle mic cords, and mop up spilled wine. By the time the guys got to Mr. November, Berninger was down on the main floor, weaving his way through the rows of cushioned seats screaming, “I’m Mr. November, I won’t fuck us over.”

They finished off with an unplugged version of Vanderlyle Crybaby Geeks (their signature encore), prompting a singalong from the whole band and audience.

Fans can get even more tonight at the Bloor Hot Docs Cinema: Mistaken For Strangers, the National documentary directed by Berninger’s younger brother, Tom, shows this evening.

And attention fanboys: Berninger will be in attendance.