The new and the old 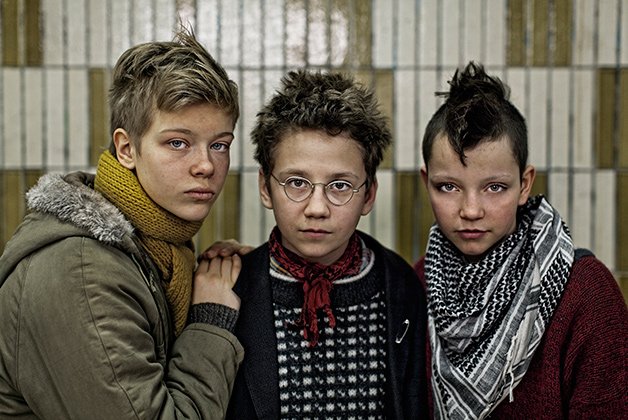 We Are The Best!

As Canadian Music Week chugs along, so does its film component, which screens at the Royal tonight and Saturday. Tonight’s offerings weren’t available for preview, but we’ve got Saturday covered.

My colleague Susan G. Cole loved We Are The Best! (Saturday, 1 pm) when she saw it at TIFF last fall, and she’s not alone Lukas Moodyson’s tale of three tween girls who form a punk band has been picking up raves on the festival circuit ever since, and it’s due to open in Toronto at the end of the month.

I wish I was as enthusiastic about Swim Little Fish Swim (Saturday, 4 pm), or even enthusiastic at all. It’s an absolutely insufferable exercise in hipster self-indulgence about a French waif (Lola Bessis, who co-wrote and co-directed with Ruben Amar) who further destabilizes the wobbly marriage of a young couple (Dustin Guy Defa and Brooke Bloom).

I can see how the whole thing is supposed to be a whimsical allegory for self-actualization that didn’t make me want to set the characters’ adorably boho apartment on fire any less.

This Frank is not that Frank, however. Not exactly. The journalist Jon Ronson played keyboards for Sidebottom in the late 80s, and reinvented his experiences into this totally fictional script, which finds a lost young man named Jon (About Time’s Domnhall Gleeson) drawn into the world of the enigmatic Frank (Michael Fassbender, and yes really) and his bandmates and following them to record an album in a remote Irish cabin and eventually to perform in SXSW.

Co-starring Maggie Gyllenhaal and Scoot McNairy, it’s a story that takes on a central theme in Ronson’s work – our fascination with the unknowable – and runs with it, director Lenny Abrahamson (What Richard Did) using that giant plastic head as a sort of emotional mirror, letting Frank’s collaborators project whatever they want onto his unblinking, placid gaze. Fassbender is amazing, often revealing Frank’s emotional extremes through body language along, and some of the music is awfully catchy.

I’d say you don’t need to know anything about the real Frank Sidebottom to enjoy Frank, but that would suggest that there were those who did.

Looking for a more classical cinematic experience? You’ll want to check out a new series opening at TIFF Bell Lightbox tonight. Orson Welles Lost & Found is really just an excuse to screen one piece of Welles’s cinema long thought lost: Too Much Johnson, a silent triptych of filmed introductions for a live performance of the William Gillette play of the same name.

Produced and directed by Welles in 1938 and featuring many of his cohorts from the Mercury Theater, it’s been unseen for decades and was thought lost in the 70s, until a work print was discovered in an Italian movie theatre two years ago. TIFF Cinematheque is hosting the Canadian premiere on Saturday (May 10) at 4:30 pm, in a one-time screening that still has plenty of tickets available — don’t worry about the bright red text on the web page. Live commentary will be provided by George Eastman House’s Caroline Yeager, with piano accompaniment by William O’Meara.

If you can’t get a ticket, the weekend offers other opportunities to familiarize yourself with Welles’ cinema. There’s his magnetic performance in Carol Reed’s The Third Man, screening tonight (Friday) at 9:15 pm, Sunday at 5 pm and Tuesday at 9:15 pm in an archival print there’s his triumphant debut Citizen Kane Saturday at 6:30 pm and its butchered follow-up The Magnificent Ambersons Sunday at 2:45 pm, and a new digital restoration of his problematic but hypnotic Othello Sunday at 12:30 pm.

And if the romance of watching Welles on the big screen puts you in a reflective frame of mind, wander up to the gallery on the fourth floor and check out The Booth, a new exhibition of portraits shot by Joseph O. Holmes in the projection booths of New York-area cinemas. It’ll give you that warm, fuzzy feeling of being surrounded by old technology.

Or maybe that’s just me.