The new C-word is charisma 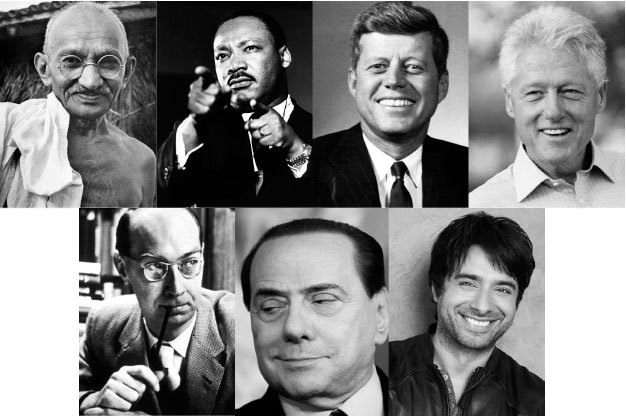 A £600,000 bronze statue to be erected in London honouring Mohandas Gandhi has stirred outrage. Turns out the peace activist was an active swordsman, joining the likes of Martin Luther King Jr., John Kennedy, Bill Clinton, Philip Larkin, Lord Byron and Silvio Berlusconi. All were known for their charisma all were, or are, serial womanizers.

Charisma is an innate quality that gets burnished by public relations consultants attempting to elevate their client to godlike status. Remember the fawning over Bill Clinton’s oratorical skills? Have you actually attended one of his talks? I did, several years ago, with a work colleague (also female), and 10 minutes into it the two of us looked wide-eyed at one another and mouthed, “We paid a hundred bucks for this?”

Charisma reels in chumps like me, hooking us into believing that Clinton is a fantastic speaker, Gandhi a humble agent of nonviolent civil disobedience and King a great civil rights leader. Given their real achievements, should it matter that these men also abused women?

Jian Ghomeshi is said to possess charisma. It was not apparent to me: I met him once or twice, and the stench of arrogance was so overpowering, I fled the room. It’s plain that he used his celebrity-induced charisma to prey on his admirers.

Another media personality who was said to have charisma up the wazoo was Jimmy Savile. Adored by young and old in Britain, honoured by the Queen with an OBE and a knighthood, Sir Jimmy was a blend of eccentricity and philanthropic goodness.

When he died in 2011, there were calls for statues in his honour until word seeped out about his raping girls in his dressing room and sexually groping the young hospital patients whose burdensome lives he was supposed to lighten.

The few courageous women who’d reported Savile’s abhorrent behaviour to the police and to his employer, the BBC, were dismissed as lunatics and liars.

The tide has since turned big time, and police have documented a shocking litany of more than 200 criminal offences, of which 34 were rapes.

For those of us who worked in media and the arts in 70s and 80s Toronto, the Ghomeshi scandal resurrects gut-wrenching memories.

Women had come through a period of vociferous third-wave feminism, and companies were under political pressure to give opportunities to the flood of women university grads.

The rolled-eyed attitude of employers changed dramatically when the benefits became clear: these newbies were young, compliant and cheap. We’d be paid much less than our male counterparts and no one would be the wiser. We women didn’t care so much we were happy to get on the ladder at all.

The downside revealed itself in short order: our naïveté coupled with our eager-to-please attitude were catnip to the high concentration of men with predatory appetites in the arts and media. Not all of them had charisma, but most assumed a sort of droit de seigneur.

There was the national news anchor who chatted up and seduced each new young female staffer. The radio host, the TV news executive, the publishing house editor, the gallery owner, the current affairs producer, the reporter, the author, the record company executive – all of them regarded the brave new world of gender parity as a sexual open season.

Meanwhile, female recruits wanting to be collegial gave them the benefit of the doubt. At the end of a shift, the newsroom intern would be pleasantly surprised to be invited by the news anchor to share a cab home, only to end up in his bed. The publishing house editor would flatter and promise career advancement, and the young staffer, dizzy at the attention, would acquiesce to his unwanted advances.

I remember a female colleague arriving at work in the morning just as the CTV grapevine was spurting out details of her previous night’s “date.” Invariably, these women ended up with hushed-up abortions, soul-destroying shame, suicidal thoughts and job loss. The predators got the Order of Canada.

In a file in a vault in the bowels of 52 Division is a videotaped statement I gave after being raped when I worked in the marketing department of a record label in the early 1980s. It happened the night of the Juno Awards, when our department was put up at the Harbour Castle Hotel, where the event was hosted.

For some reason I feel it necessary to mention here that I didn’t drink that night: my colleagues (all male) were drug users, and I wanted to be stone-cold sober in order to make a quick getaway to my room and avoid their shenanigans, which I did at midnight.

A few hours later, I was awakened by a senior executive hammering at my door. It was urgent, he said. Baffled by what calamity could possibly merit a news release at that hour, I flew to the door. My parents had always taught me to defer to authority, to trust, be nice, to go the extra mile. The executive barged in, bolted the door, shoved me onto the bed and raped me.

Nothing prepares you for such things, but women should not have to be constantly on rape alert.

Ghomeshi’s alleged antics show that little has changed in 30-plus years. To paraphrase the philosopher George Santayana: any experience that is not absorbed and retained is destined to be repeated. The shrapnel from the Ghomeshi scandal will be absorbed into the body of humanity the hashtagged outrage will dissolve into the ether, the flag of charisma will attach itself to another man un-der whose spell we will fall, and feminism will hunker down in the trenches and await its next Groundhog Day appearance. Unless we bang our fist on the table and say, “This stops now.”

Jane Christmas is a former editor and bestselling author whose 2014 work, And Then There Were Nuns, was shortlisted for the Leacock Medal for Humour and the Word Awards. She lives in England.