Joseph Gordon-Levitt, Seth Rogen and Anthony ­Mackie hit NYC in The Night Before. 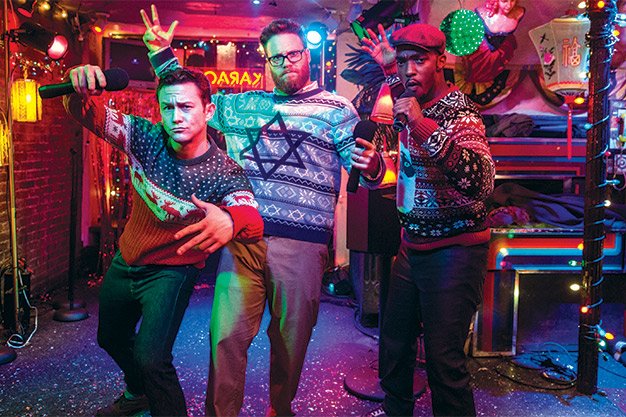 Reuniting the 50/50 team of Seth Rogen, Joseph Gordon-Levitt and director Jonathan Levine (who pulls writing duty this time instead of Rogen), The Night Before is a pleasantly goofy exercise in Christmas debauchery. It may not be a new holiday classic, but it’s a good time for Xmas 2015.

Three old friends – an expectant father (Rogen), a football star (Anthony Mackie) and a lost soul carrying crippling emotional baggage (Gordon-Levitt) – meet up for their traditional Christmas Eve jaunt through New York City. They’ve been doing this for more than a decade, but this will be their last go-round, and they all know it.

Secrets are confronted, old flames rekindled and bonds challenged, much as you’d expect in a holiday movie – just with a lot more drug use and panicked swearing, mostly from Rogen’s overwhelmed Isaac. But every time The Night Before threatens to get really dopey, a new face pops up to get a laugh, or an emotional moment lands just a little harder than you’d expect.

That’s Levine’s strength: as in 50/50 and Warm Bodies, he grounds his outsized story in recognizable relationships between complex, flawed characters.

It’s just that these characters have Michael Shannon as their weed guy.