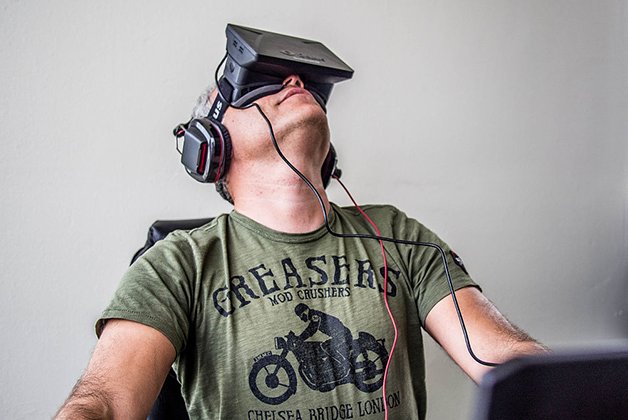 It’s the ultimate gaming dream: virtual reality. Most major attempts at it have been embarrassing: Nintendo’s Virtual Boy or Playdium’s awkward holodeck that could barely read your little Tekken kicks. But game makers saw a chance for success in the Oculus Rift, promoting it themselves through an immensely successful Kickstarter campaign. Ultimately, they could only take it so far.

To a spectator, the Oculus Rift looks like an isolating piece of scuba gear. On a player, the headset tilts, sways and turns with the head in real time. Its two contact-lens-like screens create the illusion of immersion. Users can become a journalist in a battlefield or a dolphin in a classroom.

They can explore a puzzling gallery of magic portraits or Jerry Seinfeld’s apartment.

When I used it, I was Medusa stalking through an ancient maze. I was dizzy for 20 minutes after playing.

It’s a solid device that takes us to a new frontier of interaction, with an inexpensive development kit allowing smaller creators to tinker on software, unlike major systems. This makes it an anticipated humble, grassroots device, something rarely seen in the highly invested tech world. Doom legend John Carmack has signed on as chief technology officer.

That all took a unexpected turn last week when omnipotent Silicon Valley godking Facebook purchased the company for $2 billion.

“It was shocking for sure,” says Henry Faber, whose tech co-op, Bento Miso, hosted an official Oculus game jam last August. “I suspected there would be a major partnership eventually for them to get the kind of penetration they needed. But not like this. I figured it would be a console manufacturer or an interesting software maker.

“This is the chance that Facebook’s been waiting for. They’ve had no opportunity to enter unopposed into a physical hardware space. Even Amazon beat them to drones. There’s nowhere for them to go, so this is an edge for them. If they can make it possible for a grandma to talk to grandchildren in a 3D virtual space, that’s going to move some assets.”

There has been some heated speculation since the announcement, made a week after Sony unveiled its Strange-Days-esque VR device Project Morpheus at GDC.

Some like that Oculus now has a (partner who can reach beyond niche audiences. Others don’t like the social media mogul’s shady history of brokering user data and are concerned by the way Zuckerberg’s statement downplays games, which has been the Oculus’s primary function so far.

“As much as I enjoyed seeing Oculus as a scrappy underdog, they were never going to stay that way for long,” E. McNeill, creator of an Oculus launch title called Darknet, told Polygon. “They’ve been wonderful to me as an indie dev so far, and I’m just hoping that this won’t change them too much.”

Among the haters, Markus Persson, creator of the wildly successful Minecraft, took the strongest swipe.

“Facebook is not a game tech company,” Persson wrote. “Facebook has a history of caring about building user numbers and nothing but building user numbers. People have made games for Facebook platforms before, and while it worked well for a while, they were put in a very unfortunate position when Facebook changed the platform. I did not chip in 10 grand to seed a first investment round only to build value for a Facebook acquisition.”

Persson also revealed that an unannounced version of Minecraft for the Oculus Rift has now been cancelled, though that’s not the first time his politics have stopped him from supporting a platform.

Faber says developers he’s spoken to are concerned about their programs and unsure if their specialized and erratic creations fit into Facebook’s vision. Meanwhile, another official Oculus event proposed for Bento Miso has “cooled” since the acquisition.

This development raises lots of questions. What is the future for games and the Oculus Rift? Will virtual reality be data-mined? What will happen to those programs in development?

How does Kickstarter fit when projects get real venture capitol? And finally, what does Facebook hope to do with its new toy?

There are very few answers. So close to the ultimate gaming dream, Oculus will need to be very, very surgical managing its newfound success or it could end up a footnote to gaming history like Virtual Boy.

“I’m concerned with how this will affect the goodwill of the development community Oculus has been fostering,” says Faber. “I don’t think it’s going to be a deal-breaker, but I do think the perception from indie developers will be difficult. I, for one, don’t think Facebook’s the best company. I think they have too much control over data, too many eyeballs, too many issues. But if you’re looking at this as a purely technical partnership, it’s actually not a bad thing. I just wish it wasn’t Facebook.”