THE ODD COUPLE by Neil Simon, directed by Stuart Hughes (Soulpepper). At the Young Centre (55 Mill). Runs in rep. 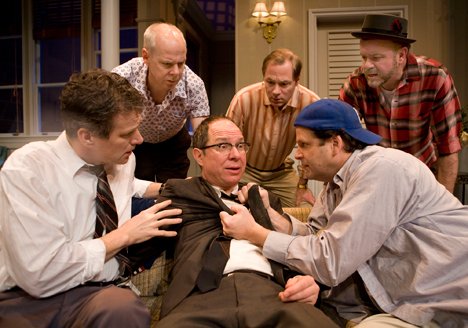 Neil Simon’s best-known play, The Odd Couple, premiered on Broadway in 1965. It still offers some laughs, despite a predictable story.

The pleasure of the Soulpepper production, though, comes not just from the script but also from the acting company, whose years of working together give the show an extra polish.

You know the set-up from the play or the TV series it inspired: the divorced, slobbish Oscar (Albert Schultz), who prefers heaps of dirty dishes and clothes to Hoovers and hygiene, lives in an eight-room New York apartment visited once a week by his poker-playing cronies.

One of those regulars, Felix (Diego Matamoros), is thrown out of his house by his wife, who’s had enough of Felix’s incessant talking and fastidious tidying-up. Oscar invites the depressed Felix, his best friend, to move in. Result: several comic confrontations.

Simon is a master of the one-liner, and the script has lots of them. But the show wouldn’t work without strong chemistry between Oscar and Felix Schultz and Matamoros have known each other for decades (at least since Stratford in the 80s), and their affection for each other infuses the characters, both in the fights and the apologies.

The quartet of poker-players, all Soulpepper regulars, is also strong: Derek Boyes as the penny-pinching Vinny, Kevin Bundy as the formal Roy, Oliver Dennis as the worrying Murray and Michael Hanrahan as the cynical Speed. Their comic timing, both individually and as a group, gives an extra lift to their scenes.

As the very available Pigeon sisters, Oscar’s upstairs neighbours, Raquel Duffy and Michelle Monteith make good foils for Oscar and Felix. The double date, something that Oscar desperately needs, ends up an amusing fiasco, not only in terms of sex but also dinner.

Though The Odd Couple offers few surprises, it still provides some laughs and a chance to see the actors’ winning work.