The once and future Kensington Market 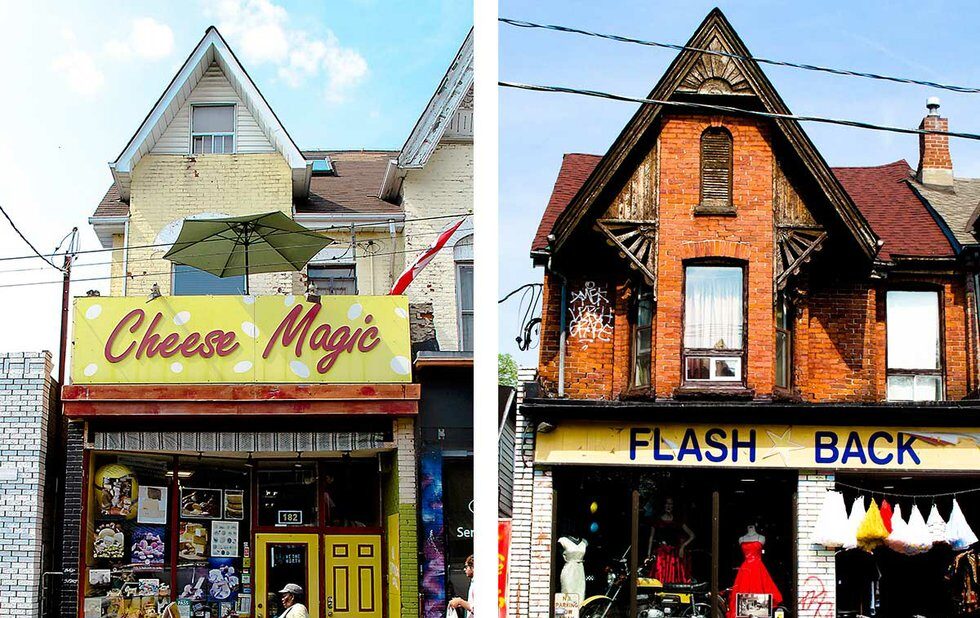 Kensington Market is a National Historic Site, along with battlefields, forts and the museumized homes of famous and not-so-famous Canadians and other places made famous mostly by people who are now dead. Next step in the 200-year history of the Market as summarized in last week’s NOW: its designation as a Heritage Conservation District.

How to save it, then, from fossilization or transformation or its most feared existential threat: into a second Yorkville? Here are some suggestions.

Where possible, conserve Kensington Market’s most conspicuous vernacular form, in particular its graffitied, ramshackle shop fronts, attached to equally graffitied Victorian houses. Where conservation of built heritage is not possible, maintain that form in ways that are interesting and visually striking – as well as practical. That’s important!

Ban the bland: select new designs for buildings by competition juried by members of the Market community as well as architectural experts.

Select for what is experimental, exciting to visit, live and work in as well as to look at. Inspiration might come from the zany architecture of Friedensreich Hundertwasser, but beware of creating a Disneyland.

Also, the maximum allowable height of buildings should be no more than four storeys. Buildings on College might be higher but not much higher. More important than height: new builds in the Market area must be striking

The gateways to Kensington Market at Augusta and College and further south at Dundas are a disgrace. Rebuild them both, in fascinating, welcoming ways that link the Market to its main streets. 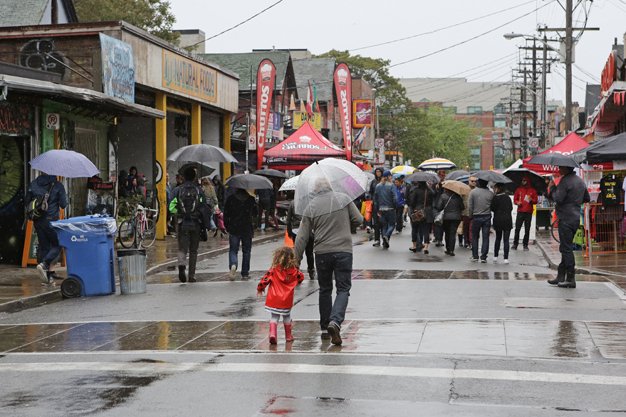 Denison Square is to be “re-vitalized.” That will be good if it works. But the Market could use more green space. Where? How about at the top of Augusta, as part of a rebuilt market entrance, on the Budget rent-a-car site and on open space at Kensington Community School that currently fits so awkwardly on its lot?

Connect the Market more closely through built, social, business and residential links to its nearby neighbourhoods – College Street, Alexandra Park and Kensington School, especially, would benefit from closer links. So would the Market. 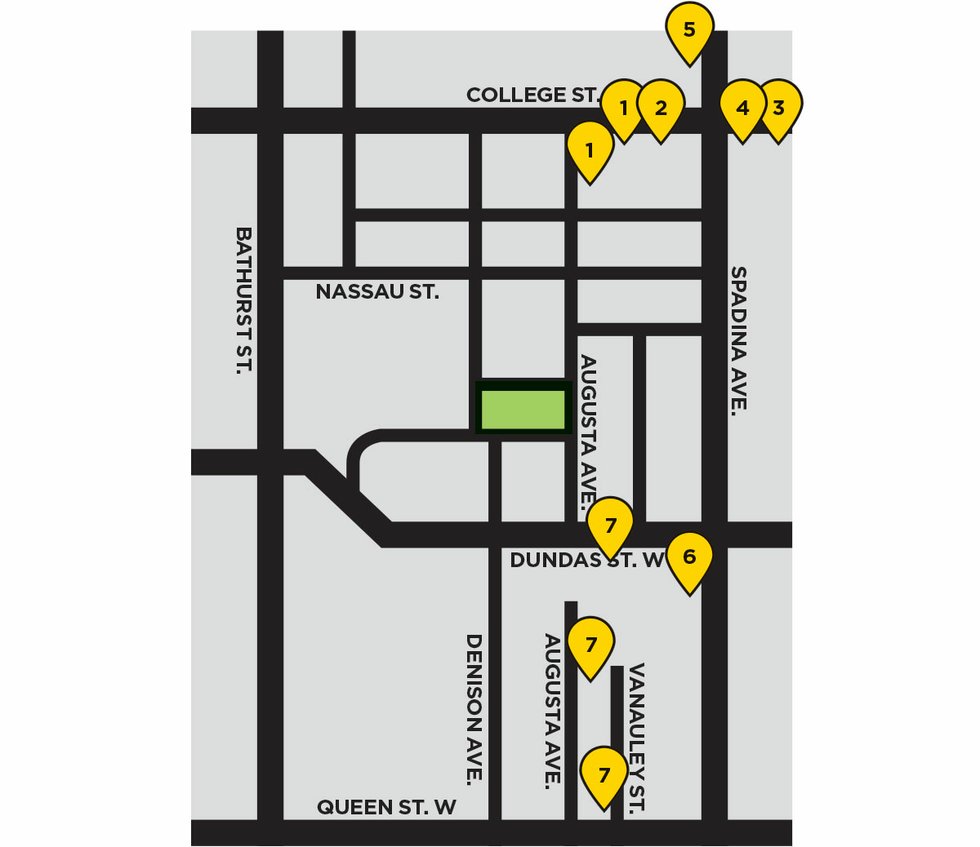 Proposed and new developments in and around the Market’s Bathurst, College, Spadina and Dundas borders.

Diversity is Kensington’s biggest asset. For more than a century, it’s been a place where new Canadians grow new roots and thrive. If that capacity is lost, the Market will cease to be Kensington Market. How to enrich that diversity? Provide places that offer daycare by day, language and other classes by night. 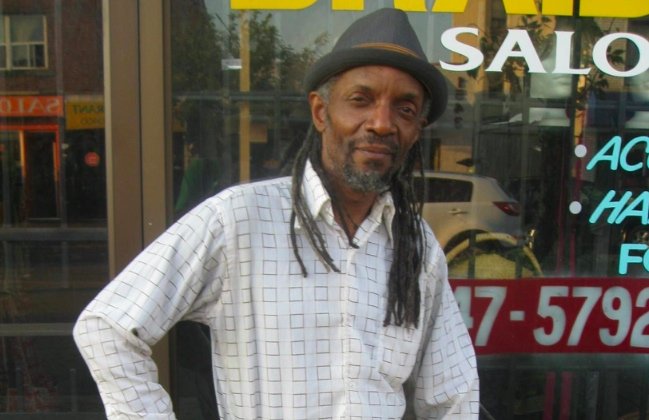 Eyes to the future

Is it possible that the Market is not diverse enough to ensure its own survival? When Active Surplus, that tinkerer’s and roboticist’s cabinet of wonders, was forced to leave Queen Street, why didn’t it move to Kensington Market? The Market would benefit from an infusion of 21st-century as well as traditional technology, maker spaces and workshops, in addition to its lively art scene. 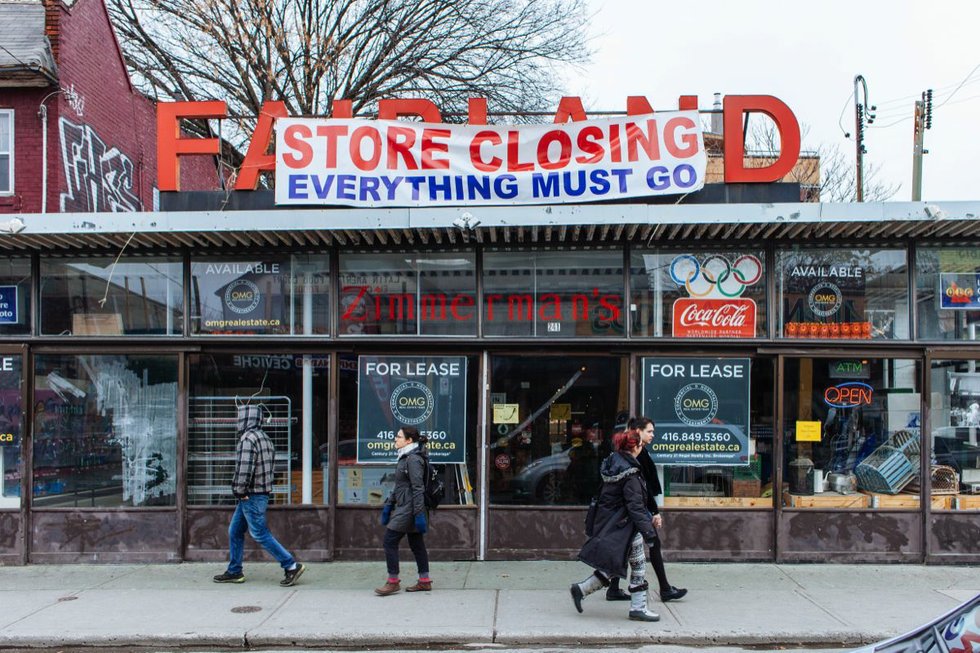 Zimmerman’s Freshmart on Augusta, a longtime staple in the Market, just went out of business.

When places like Kensington are at risk, conserving their physical attributes is easier than conserving their souls. Think Evergreen Brick Works, Wychwood Barns and even the beloved Distillery District, where a friend of mine once grumbled, over coffee at Balzac’s: “This place is lovely, but it also makes me sick. I can’t forget that real men once had real jobs here.” PC? No. Did he have a point? Maybe.

Those places are lovely and they are much enjoyed by lovely people, but they are also gentrified playgrounds that feel like ghosts of the places they used to be. Is that the fate we want for Kensington Market?

If Kensington Market is to remain a place where its residents are empowered to grow the future, let the city protect and nurture it. But the most successful and best-loved communities are rarely planned. Anyone who feels tempted to engineer its evolution and meddle with its fine balance of order over chaos had better remember that.