NowMagazineNewsThe persistence of poverty in Ontario

The persistence of poverty in Ontario

Sigrid Kneve has her hands full as she tries to negotiate the steps of the 75 Sherbourne bus with a. 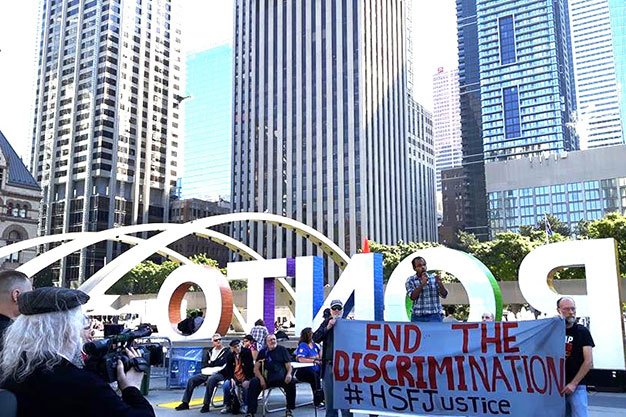 Sigrid Kneve has her hands full as she tries to negotiate the steps of the 75 Sherbourne bus with a shopping cart crammed with food.

Every Sunday at noon, Kneve and five other Indigenous women serve lunch to poor and homeless people from a spot near the conservatory at Allan Gardens.

We get donations from restaurants whole meals, says Kneve, a community advocate at CRC Regent Park Community Food Centre but who is better known for leading anti-poverty protests as a volunteer with the Ontario Coalition Against Poverty (OCAP). Kneve was a single mother living in Kitchener-Waterloo when she joined her first OCAP campaign in the late 90s to fight Mike Harriss clawback of the child tax credit from people on social assistance. For poor people in the province, not much has improved since then. The Allan Gardens program Kneve helps run is self-funded and operates without any agency affiliation. There are really caring people out there who do this. And you know what? They dont even want it known that they do it, she says.

Nearby, a couple of women are setting the food out on a portable folding table. Others are sorting donated clothes, shoes and toiletries.

We get a lot of children and women with babies, says Kneve.

Among the people who start lining up at the food table are many familiar faces. Cathy Tsong Deh Kwe, who started the Sunday lunch in the park initiative, is making sandwiches and scooping pasta salad onto paper plates.

Over the course of the afternoon, close to a 100 people are served, many of them also receiving plastic bags filled with assorted items: pants, T-shirts, shoes, socks, pillow cases, blankets, hand lotion, toothpaste, razors.

Patrick Philippe, who lives near the park, comes by with his wife to drop off contributions. Today its several pairs of high-priced shoes.

Philippe, a car salesman who came to Canada from Haiti in the 70s, says the numbers at the park show the systems set up to help people in poverty are broken.

I cannot understand how in a country like this, we see so many people struggling and homeless, he says. Dont get me going, because really when you think of it… its unacceptable.

One of the women has fired up some sweetgrass in a bowl. She smudges herself and passes it around to the next person in a circle thats formed. It bothers us to see homelessness. Thats not our way, to see people left out of the circle, says Kneve. The lump in her throat is visible.

After decades of intensifying austerity and eroding income supports, social assistance in Ontario is now so wretchedly inadequate that people are unable to feed themselves properly, retain their housing or maintain their health.

Total benefit income for those who depend on Ontario Works (OW) and the Ontario Disability Support Program (ODSP) locks nearly 895,000 Ontarians into deep poverty, according to Ontarios Social Assistance Poverty Gap (PDF), a May 2016 report authored by Kaylie Tiessen, an economist with the Canadian Centre for Policy Alternatives (CCPA).

The report shows that the poverty gap the difference between total benefit income of people on OW and ODSP and the poverty line has grown by 59 per cent for a single person and between 30 and 40 per cent for families since 1993. In 2014, almost two-thirds of Ontario households reliant on social assistance experienced food insecurity inability to feed oneself or ones family adequately.

Its a similar story for the working poor.

On October 1, the province announced a 15-cent hike in minimum wage to $11.40 an hour. The 1.5 per cent increase, which the Liberals have indexed to the Consumer Price Index, adds up to annual earnings for a person on minimum wage thats about $800 above the poverty line in Ontario, which is $19,930.

But thats still about 17 per cent below a living wage when you factor in the rising costs of food and housing, says Deena Ladd, a coordinator with the Workers Action Centre.

Labour Minister Kevin Flynn notes that the government has raised the minimum wage nine times since 2003, but OCAP organizer John Clarke argues that its been the attack on social assistance in this province thats made it possible for employers to force people into the low-wage sector in such incredible numbers.

Premier Kathleen Wynnes government has started yet another cycle of consultations on poverty reduction. The Building Prosperity And Creating Jobs chapter of the provinces March 2016 budget promises to chart the path to comprehensive reform that effectively reduces poverty.

To that end, the Ontario government announced in June the formation of the Income Security Reform Working Group and a pilot project to test whether a basic income would provide a more efficient way of delivering income support and achieve savings in other areas, such as health care and housing supports.

The Ministry of Community and Social Services appointed former senator Hugh Segal to advise on and design the basic income pilot. Segal, who served as chief of staff to Ontario premier Bill Davis and prime minister Brian Mulroney, has delivered his report, which the ministry is scheduled to release as a discussion paper by the end of the month.

To Clarke, the Liberals basic income plan, which would provide those on social assistance with a monthly lump sum, sounds alarmingly like code for go shopping.

Thats why the International Monetary Fund is supporting basic income, thats why right-wing thinkers like Charles Murray in the States support it, says Clarke

Yalnizyan says that basic income can be a poverty reduction strategy if that is its explicit goal.

But this is rarely the case, she writes in her report. It is highly unlikely that any basic income model will provide enough income to cover the costs of the losses of [other] supports, so those with low incomes could very easily end up worse off, in material, experiential terms.

Ontarios plan references experiments in Finland and Utrecht, Netherlands, where basic income plans are also on the table.

But in Finland, says Yalnizyan, the proposed pilot project would reduce supports for the unemployed, not expand them, [and] in Utrecht, the focus is on getting those on social assistance to do more.

When IMF economists touted basic income as way to put a cap on inequality, it got the attention of the Belgium-based think tank BIEN (Basic Income Earth Network).

To BIEN, the IMF sees basic income as a way to put money into peoples pockets to spend and stimulate the economy, a form of capital redistribution.

Give these poor people a basic income and all of a sudden they stop being such bad loser crying babies and resume buying enough stuff to maintain this completely absurd system of domination, privilege and exploitation, writes BEIN contributor Andre Coelho in an emotional opinion piece last month.

The Ontario governments consultation on basic income proposes possible implementation of the working groups recommendations in January 2018. But Minister of Social Services Helena Jaczek has already cautioned that reforms will only happen once the provincial deficit has been erased.

OCAP was recently in the headlines for going to bat for a single mother with two disabled kids who was refused access to the citys Housing Stabilization Fund (HSF).

OCAP and other anti-poverty organizations see the HSF debacle as another piece of a bigger and darker austerity picture. Were dealing with a situation where austerity is being redefined. Its no longer a question of reduced entitlement, but of lethal abandonment, says Clarke.

Toronto created the HSF after the province downloaded its Community Start-up and Maintenance Benefit (CSUMB) to municipalities. Available to people on social assistance, the benefit was accessed by nearly 200,000 annually for emergency housing needs. People who qualified received the full $1,500 benefit those denied could appeal to a benefits tribunal and get legal representation.

Before downloading CSUMB, the province cut it in half. Some municipalities created programs similar to the HSF, while some created nothing, says OCAP organizer Yogi Acharya.

So all of a sudden you have this scenario where your eligibility and accessibility to this housing fund depends on where you live.

Councillor James Pasternak, who chairs the citys Community Development and Recreation Committee, concedes that the HSF is broken.

But a report outlining service enhancements is not expected until next month.

Back in the summer, the Toronto Christian Resource Centre in Regent Park hosted a community meal and speakers night, Looking The Basic Income Gift Horse In The Mouth.

Clarke surveys the 50 or so people finishing up their plates before asking if theres anybody from City Hall in attendance. No hands go up, but somebody sarcastically yells out Pam McConnells name.

In her seventh term as councillor for the downtown ward that includes Regent Park, McConnell is well known to most in the room, having presided over local planning and neighbourhood issues including affordable housing and the re-development of Regent Park, which has dramatically remade the neighbourhood. Shes also been chosen by Mayor John Tory to lead Torontos Poverty Reduction Strategy.

Together we will address the issues, create solutions and drive systemic change, reads McConnells 2015 interim report.

The report clearly acknowledges the economic inequalities afflicting the city. Some of the spending recommendations made in the report are sound, for example, to provide more financial and social support to individuals transitioning away from unstable or insecure housing.

But the recommendations contain few specifics and set no immediate timelines. (McConnells office did not respond to requests from this reporter seeking more details.)

But after 10 years of unfulfilled promises from different levels of government, Clarke says, its hard to believe there is any good faith process of poverty reduction under way.

Opel Sparks parks her scooter outside the dining hall door and pulls herself up to the front to address the room. Sparks, 65, is on ODSP and suffers from mobility issues after a car accident. She looks splendid in her wide-brimmed mauve straw hat.

I encourage you, use your voice, say what you need to say, because unless we stand up, nothing is going to be done. Poverty is an industry that is killing us.