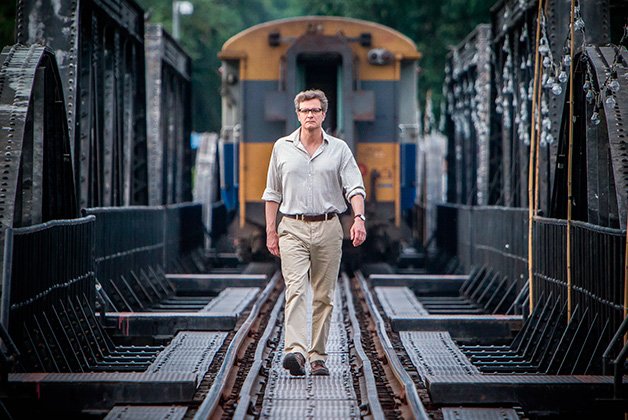 A true story of overcoming trauma, The Railway Man begins with its protagonist on the floor, muttering. By the end, he’s upright and speaking coherently. The hundred minutes between dutifully chronicle the arduous process of getting on his feet, yet fail to capture the drama or psychological complexity involved.

While serving in the British Army in Southeast Asia during World War II, Eric Lomax was taken prisoner by the Japanese, put to forced labour, beaten and tortured. The Railway Man begins years later, when the endearing yet damaged Eric (Colin Firth) meets Patti (Nicole Kidman), the nurse who will become his wife and oversee his recovery. Their romance lasts some minutes thereafter we’re treated to fumblingly structured flashbacks and Eric’s present-tense journey east to confront – and eventually befriend – his chief torturer, a fascinating development that’s barely explored.

Technicolour greens and blues add an initially inviting old-fashioned air, but the tone is stiflingly solemn. Hushed conversations and ostensibly terrifying scenes are all accompanied by the same fussy score, yet the film never finds its rhythm.

Firth is betrayed by his character’s paucity of depth, while Kidman’s interest in the role is simply baffling. Her character is strictly utilitarian, the tormented hero’s helpmeet, like Ingrid Bergman in Spellbound but without any personality.