The rise and fall of the Kingston Road motel strip 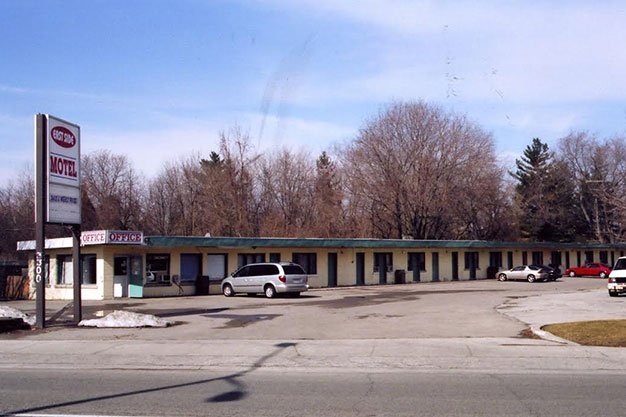 The large white sign by the driveway of the East Side Motel near Kingston Road and Mason looks as if it’s lit by a 60-watt bulb, its tantalizing offer of “LOW, LOW DAILY WEEKLY RATES” barely illuminated.

The long, one-storey L-shaped building shows several signs that basic standards of upkeep have long been abandoned. But at the bottom of the sloping driveway are unexpected signs of life: a broken-down car jacked up for repairs, BBQs, lawn chairs and tables and potted plants. Religious symbols mark the motel’s doors and windows.

Through the open blinds of one unit we see what appears to be a hospital bed in the middle of the living room, as if we’ve stumbled upon the Company headquarters from John Frankenheimer’s Seconds. It belonged to a woman who was terminally ill, who lived here with her husband. She was a citizen of the United States and the bed had been donated, her husband caring for her in that unit until she died.

It’s clear that people have been living here for extended stretches of time. Our mild curiosity about an unknown stretch of road leads to many subsequent visits and a full-fledged history lesson on the rise and fall of a storied neighbourhood – and some troubling insight into the current state of Toronto’s shelter system. 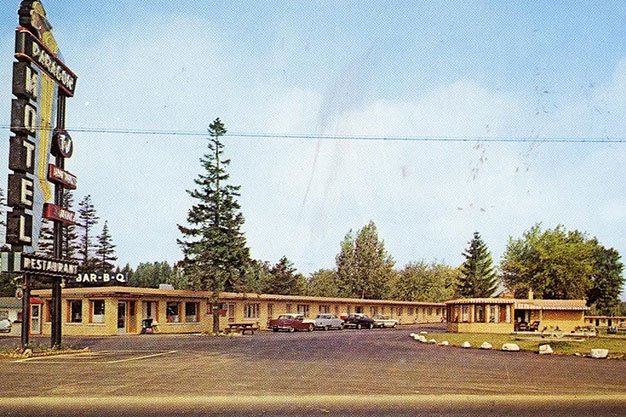 Kingston Road, also known as Highway 2, has been integral to the Scarborough area since it was established in 1817, its name signalling that it was the sole route connecting Toronto and Kingston. What was then a post road for mail coaches turned into a bustling thoroughfare for automobiles moving between Toronto and eastern Canada.

Like Route 66 in the U.S., Kingston Road was marked by the 50s and 60s heyday of motor hotels. Cars were relatively inexpensive, easier to drive and safer than ever before. The newly introduced options of air conditioning and power steering made the prospect of a road trip more appealing for young couples and families looking for a little adventure. You could cruise through Pickering and have a refreshing cocktail in the grassy courtyard of the Lido Motel, enjoy the soda fountain and in-room television at the Avon, grab a medium-rare hamburger in the spacious dining room of Andrew’s Motel or take a dip in the outdoor pool at the Roycroft.

The Paragon Motel boasted 42 fully modern units, a convention hall, restaurant and children’s playground. Built in 1949, it became the Wellington Motel in 1973 and the East Side Motel in 1987. The east half of the property is now the Comfort Inn.

But completion of Highway 401 changed the way Canadians travelled by car. And while Kingston Road still stretches to Pickering, the motels that lined the street became more redundant with each passing decade as chain hotels and service stations popped up along the former superhighway. The amorality of development means that the prosperity of one area may force another to flounder, and by the 80s the Kingston strip had noticeably decayed. 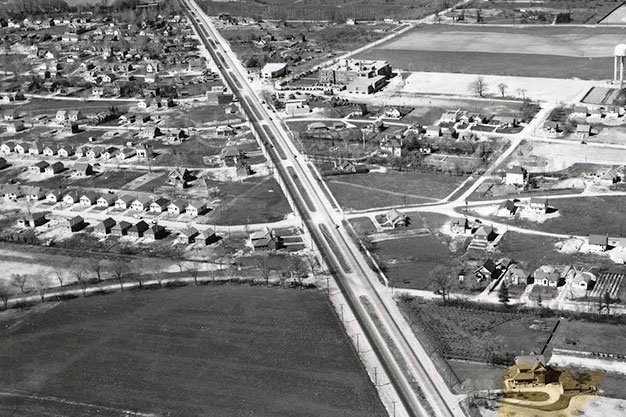 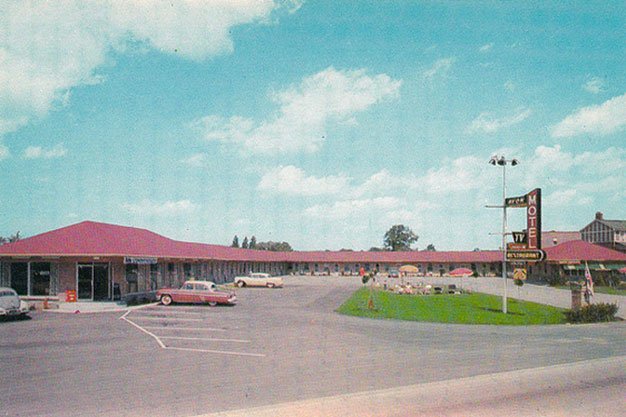 Forty-six years after the final stretch of the 401 opened in 1968, we’re standing in the Roycroft’s parking lot exactly where the swimming pool used to be. It’s June 2014, and we’re fishing for a lighter to join Jennifer in a cigarette.

Jennifer isn’t a tourist. She’s a former law clerk who’s suffered a series of personal misfortunes and, at the time of our conversation, calls the Roycroft home. She and several others at this location, and hundreds along Kingston Road, are clients of Toronto’s Hostel Services program, which uses such motels for temporary shelter.

Toronto began contracting motels for social services in the late 80s as an emergency solution to growing demand. Between 1988 and 1999, the number of homeless children grew by 130 per cent, changing the model of motels-as-shelters from provisional to ongoing.

At the peak of this period, Kingston Road motels were supplying 700 beds for the homeless, with an additional 200 provided by the Toronto-operated Family Residence shelter at Kingston and Galloway. By 2000, an overwhelmed shelter system coupled with a rapid rise in illicit activity caused the city’s community services department to adopt a three-year proposal that would reduce the total number of motel beds to an ideal range of 150 to 200, depending on municipal and provincial financial participation.

At the time of that report, the principal motels used for shelter were the Guild Inn and the Lido Motel. Since then, the former is being converted into a banquet hall, while a drive through the parking lot of the latter confirms that the Lido is still home to the transient class of the homeless and refugees awaiting permanent shelter.

Back at the Roycroft, Jennifer says she and her husband have been living at the motel for the better part of three months. Behind us, kids nine or 10 years old play hide-and-seek between three open doors on the motel’s second level. Jennifer can be moved at any time, depending on demand.

About two weeks later, we get a call from an irate Jennifer, who’s been packed up and moved to another room across the parking lot. She claims the new space is unlivable, with broken appliances and bed sheets that appear never to have been washed.

Most residents share her frustration with conditions on Kingston Road. Refugees and other homeless people who rely on Toronto Hostel Services want adequate living conditions for their families, accessibility to schools for their children and the chance to live within a community where they can remain once they’ve achieved economic sustainability.

Then there are the area’s long-term residents, whose comfortable homes contrast sharply with the run-down strip motels. The 2000 report mentions a city effort to kick-start development to revitalize Kingston Road with condos and new businesses. Haven on the Bluffs, a 250-unit condo project overlooking Lake Ontario that’s currently under construction in the Cliffside neighbourhood, includes the Andrews Motel, which was sold in 2012 to VHL Developments. 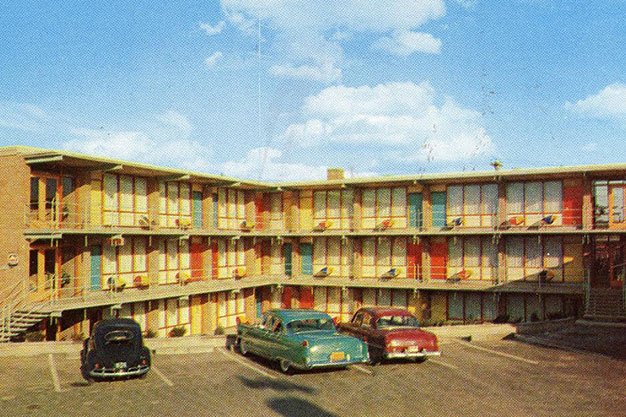 Some owners of the more dilapidated motels further east on Kingston that aren’t involved in housing the homeless are likely hoping for a similar rescue. One owner we spoke with who declined to go on the record complained that falling property values have forced her to keep her motel’s nightly rates low, which in turn attracts prostitution, drug dealing and a steady police presence.

Would-be room renters at the Hav-A-Nap, for example, are greeted by a thick plane of bulletproof glass and closed-circuit surveillance. Not exactly the most reassuring welcome for a newcomer.

In January, Mayor John Tory announced the opening of an additional 90 beds at motels along the strip to free up space in the city’s shelter system. So while plans for condo development in the near future remain unclear, what’s certain is that 25 years later, motels on Kingston Road continue to be the backup plan for Toronto’s overwhelmed shelter system.

Don the Maintenance Man from Alex Butt on Vimeo.

It’s a sunny Saturday afternoon when we make our way back to the East Side. In daylight, it makes a much different impression. Beat up, yes. Eerie? Not at all.

Of three women sitting on plastic chairs, one says she’s been here three months, another four, the last six. None of them expect to be here much longer. Asked if they know anyone who’s had to live at the East Side for an extended period, they point to a unit five rooms down. We walk over and knock, and about 30 seconds later the door opens.

That’s when we meet Donald Gillis.

Gillis is a 76-year-old plumber who moved into the East Side about three years ago. He’d been the motel’s maintenance man for many years, and was tired of living alone and commuting to work every day. His children are grown up, his two wives had died, and he was more than happy to spend his time around those who depend on him.

He grew up in Glace Bay, Nova Scotia, and joined the many postwar Maritimers who migrated to Toronto looking for work. He tells us about hitchhiking across eastern Canada and jail-keepers kindly putting him and his buddy up for the night.

At 17, he arrived on Kingston Road in the summer of 1956, during a period when the area was arguably at its best. Gillis and the street have slowly grown older together. He’s emblematic of Kingston Road: resilient, blue-collar and with a rich history.