NOW MagazineMusicConcert reviewsThe Scene: Loving in the Name Of and Pharmakon

The Scene: Loving in the Name Of and Pharmakon 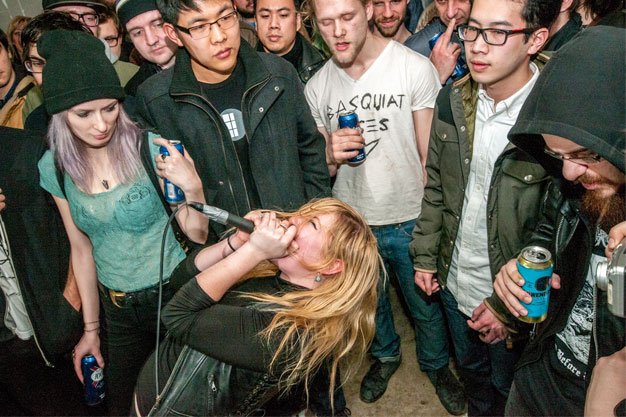 Before her set started, New York City industrial noise musician Margaret Chardiet, who goes by Pharmakon, had trouble getting her table of pedals and noise machines working. She reacted by chucking cables and smaller pieces of equipment over the heads of the waiting crowd and into the farthest corners of basement DIY venue S.H.I.B.G.B’s.

The aggression continued once the power kicked in. Deep, sinister industrial sound waves droned from beginning to end of Chardiet’s short set, accentuated by piercing blasts of feedback, thunderous crunch and what sounded like a fleet of planes dive-bombing. Her vocals were thick with distortion, echo and other evil-enhancing effects.

Holding a mic while twisting dials, she increased the set’s intensity through her physicality: marching through the audience that surrounded her heaving herself toward us while holding a machine against her chest pushing backwards against strangers while screaming out her soul.

With no clear beat to move to, it took some time for the crowd to let go. But as she gave more and more of herself, some semblance of body-slamming began, and Chardiet was on her back on the floor, writhing and wailing, by the end. Tortured. Cathartic. Yet precisely controlled. Powerful stuff.

A$AP Ferg and YG‘s tour was billed as a rare East Coast-meets-West Coast team-up, but any regional differences between the rising rappers’ styles and sounds were mostly obliterated by their shared love of pulverizing, sexually charged performance.

YG has parlayed the g-funk gangsta rap sound of the 90s into modern club anthems. He arrived to chants from a restless, sloshed-looking audience, and the room lit up as he launched into BPT. His gruff delivery made him sound older than his 24 years, and added gravitas to his more introspective cuts.

Lest anyone was worried things would get too heavy, he soon shifted to cranking out club jams and encouraging women to bid adieu to their undergarments.

A$AP Ferg continued in the over-sexed vein, but backed by huge, trappy EDM beats and ravey lights. He started out songs with call-and-response lines that segued into singsongy a cappella verses that built anticipation for massive beat drops.

But he struggled to stay in control, and sapped the momentum of the already late-to-start show by doing too many rehearsed bits – like a failed attempt to part the audience to create a runway – with or without the cooperation of the crowd.

People bolted for the exits when the last song finished at 1 am, leaving him to sheepishly return to encore with new song Nia Long. The booming production not only masked the nuance in his rhymes and flows, but also the room’s waning energy.

LOVING IN THE NAME OF at the Mod Club, Friday, January 16. Rating: NNNN

The simple concept behind Loving In the Name Of doesn’t give you a full picture of just how fun the night is. Getting a cover band to play well-known songs doesn’t sound like anything special, but in this case it’s an all-star group of local indie rock luminaries fronted by a rotating cast of powerhouse vocalists performing their favourite hits, and it’s become a very popular Toronto institution in the past few years.

For this edition, singers included Andre Ethier, Tanika Charles, Daniel Woodhead and many others, performing songs by Tom Petty, House of Pain, Robyn, Phil Collins, Janis Joplin and the Rolling Stones. Alongside a live set by the house band The Best, DJ Scott Cudmore played tunes before and after, sticking to the kinds of mainstream pop hits that make you feel guilty for knowing all the words to them.

It’s almost tongue-in-cheek, but everyone enjoys themselves so much that it doesn’t seem important to determine how much irony is involved.

Natalie Mering has a charmingly officious presence onstage. Standing behind a keyboard and in a front of a screen displaying undulating amorphous pixels, the singer, who performs under the Southern Gothic moniker Weyes Blood, kept her banter cordial but to the point. “I would introduce my band,” she said, “but they wish to remain anonymous.”

It was just as well. The three members anchored her dramatic, psych-leaning ballads in the realm of 60s folk-rock, playing up the more traditional elements of the noise-influenced songs off The Innocents, her second album.

It was only when the bassist, drummer and guitarist left the stage that Mering really unleashed her swirling vibrato on two songs, including a cover of Fred Neil’s classic Everybody’s Talkin’. Suddenly, her brand of New Agey Americana stopped sounding (to quote one of her song titles) bound to earth and took off into a more interesting dimension.