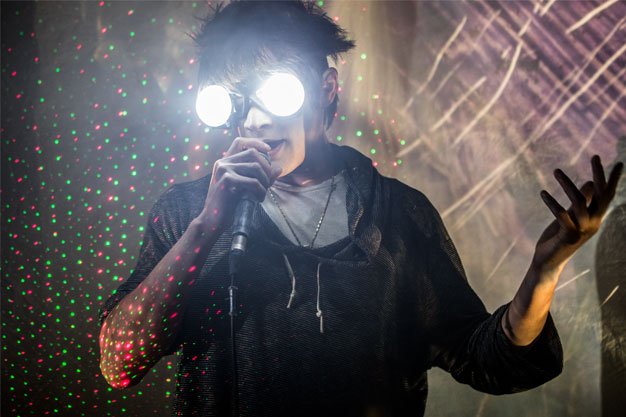 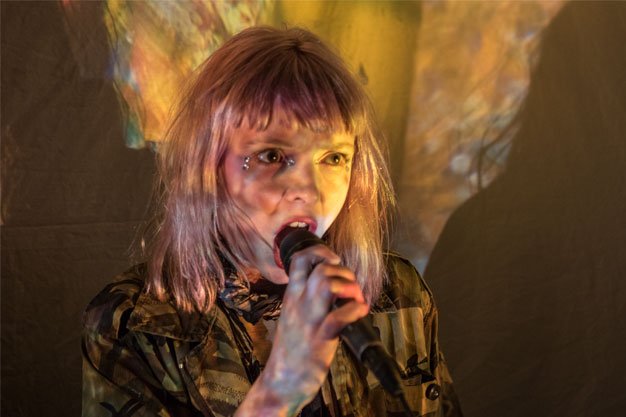 Wavelength‘s pop-up gallery at HuntClub Studios – a small space that looks like an office, dropped ceiling panels and all – was transformed into party central for the Thursday-night launch. General Chaos worked his magic, projecting psychedelic visuals onto the white sheet that opener Zoo Owl and then Petra Glynt used as a backdrop.

Zoo Owl uses the visual aspect of performance to his advantage. Wearing a pair of eyeglasses that shoot intense blue-white light onto his electronics, he sways, stands and crouches behind his machines. His electronic pop has a dark jungle element to it, while his high vocals, thick with reverb, sail overtop.

Petra Glynt, rocking leather overalls, delivered a similar style of experimental electro-pop, but her low, enchanting voice set her apart. And her sound has a dancier, harder edge. Effortlessly singing, drumming, twisting dials and pushing buttons, she got the crowd grooving till the pop-up shop closed for the night.

When you’re the singer of on-haitus New York City indie rockers the Walkmen, you can bring out a decent-sized crowd on a Tuesday evening in a small basement bar, as Hamilton Leithauser did. Alongside a three-piece band, he performed as if the Drake Underground were Madison Square Garden, belting out his dramatic Strokesian rock from the get-go until his neck veins bulged.

Midway through, half the band left the stage and Leithauser picked up an acoustic and brought things way down, including on Alexandra, from last June’s Black Hours album. Further stripped-down ballads hushed the room – enough for fans to shush any remaining talkers and allow Leithauser’s powerful voice to command all attention.

Despite the impassioned performance and tasteful songwriting, his overall sound lacks that special something. This became especially clear during the encore, when Leithauser, who sounds more than a little like Bob Dylan, chose Annie’s Going To Sing Her Song, written by Tom Paxton and popularized by Dylan around 1970. Its sweet simplicity, enhanced by thunderous and ambient electric guitar, finally hit that elusive sweet spot.

Joel Smye should be smiling. It’s the first night of a weekend of anniversary parties for Coda, the dance club he and his partner, Stephan Philion, opened a year ago, and the place is packed full of happy partiers, but he’s got a frown on his face because something isn’t quite right with the additional speakers they just installed in the lounge area. Even if the newest upgrades still need some minor tweaking, though, no one else in the club is complaining that constant stream of improvements and attention to detail are important reasons his venue is already able to boast such a dedicated following.

Toronto house duo Art Department played Coda’s opening party, so it’s fitting that they’ve returned to headline the club’s anniversary bash. Their recent second album, Natural Selection, found Jonny White and Kenny Glasgow moving even further away from the dance floor and deeper into dark introspective electro-pop territory, but their DJ performances remain very much in touch with the after-hours party vibe. Compared to previous Toronto appearances, this set felt a bit harder and more minimal, but a strong soulful undercurrent kept things from getting too abrasive.

The Silver Dollar‘s recent recognition as an official heritage destination nods to the iconic venue’s past, but its commitment to the future also deserves kudos. Case in point: the Class of 2015 series featuring bands destined to make it big this year.

The poor mix that hampered BB Guns and sparse trio Nikki Fierce was smoothed out for Montreal trio Nancy Pants, whose swinging set had a serious Detroit Cobras feel. Their dark verses leading into insanely catchy choruses made their set the evening’s highlight.

New Fries showed none of the poppiness of the three earlier acts but were engaging in their own right. Lead singer Anni Spadafora seemed possessed at times and took the band’s spastic punk to strange places. When it worked, it was tough to look away. But other times they lacked direction.

Bile Sister finished with the late set, letting loose their ambient, electronic pop on a crowd that wasn’t entirely focused.