NOW MagazineMusicConcert reviewsThe Scene: Biblical, Tigga Calore and Not of

The Scene: Biblical, Tigga Calore and Not of 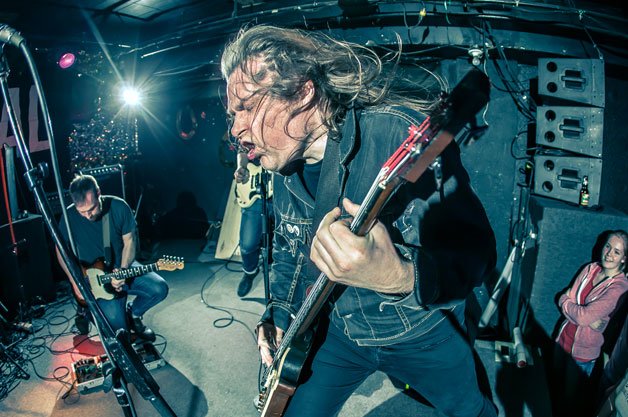 BIBLICAL and PANIC at the Horseshoe, Friday, April 17. Rating: NNNN

Playing their first hometown show in ages, Biblical shook the dust from their instruments and from the ‘Shoe‘s ceiling in a set that was as much about volume as it was about the band’s incredible focus.

But first, local openers PANIC got things off to a frenzied start with their strobe-lit garage rock stomp. Their banner next to Biblical’s made for a great visual pun: “BIBLICAL PANIC” is really the best way to sum up two groups whose sounds are crazed takes on gospel.

When the headlining rock ‘n’ roll zealots finally took the stage, they teased out their stoner-y heaviness, a welcome counterpoint to PANIC’s immediacy. Most songs extended well beyond the five-minute mark, but Biblical sustained a sense of urgency throughout their set.

Besides, the ticking clock was everyone’s least concern, especially when Nick Sewell‘s bass locked grooves with drummer Jay Anderson on an almost spiritual level, leaving the now three (!) guitarists to do their very loud, howling thing.

New York City’s vogue scene briefly flirted with the music and fashion mainstream a few years ago thanks to attention from tastemakers Diplo and designer Rick Owens. Since then, ballroom music has continued to evolve, chewing up the latest hip-hop hits and house music trends and spitting out jagged beats suitable for dips and death drops.

In Toronto, the long-running queer hip-hop party Yes Yes Y’All has reliably provided a platform for the convergence of the worlds of rap music and voguing. This month they booked Tigga Calore, an MC who morphed from rapper to ballroom commentator and back again during a mini-set of her club-rap cuts produced by Brenmar and MikeQ.

She rapped fast and with a confidence that bordered on menace, matching the thundering BPMs of songs like Payroll and B.E.A.D.S. (Bitches Everywhere Always Desire Shade). She was like a verbal dancer, pausing on the finger snaps to playfully emphasize her New Yawk attitude and elocution.

Eventually, Calore ceded the cramped Ryze stage to dancers from the audience and incorporated freestyle commentary on each one’s moves and looks. Just the right amount of vogue and rap.

Local crew House of Monroe followed with an attempt at staging a mini-ball. But their strict runway category rules quickly sapped the initially game crowd’s momentum, and without a charismatic MC to preside, it was a little too much vogue.

NOT OF and NICE HEAD at the Magpie, Saturday, April 18. Rating: NNN

New Toronto noise rock duo Not Of delivered a tight set to a small but attentive crowd at the Magpie for the launch of their debut album, Pique. Drummer Jason Seance is an animal behind the kit – precise, formidable and very loud. The loudness of the drums meant capital-L loud guitar, too, tackled by John Ex with energy. He gets an impressively full – and surprisingly bassy – sound from one Tele and a smattering of pedals at his feet.

Too bad the P.A. couldn’t keep up. Vocals were virtually inaudible all night, which was a pity since Not Of’s strong vocal melodies add shape and dynamism to their ambitious songs. And the low lights were a thorn in Ex’s side, preventing him from properly seeing where to step. But despite a few complaints, the long-time musicians stayed positive and gracious.

During Nice Head‘s opening set, their singer used the empty space in front of the stage to pace and rage like the Hulk stomping through a forest. He hollered passionately, though we couldn’t hear it. The four-piece also play noise rock, but of a punkier variety. Their guitarist is their secret weapon, attacking the instrument with creativity and moving between power-chord heaviness and string-bendy fretboard experimentation.

A solid show that might’ve been great in another venue.

Few musicians can run an afternoon of workshops and panel discussions and then rock a dance club later that night, but Canadian techno superstar Richie Hawtin has always been adept at walking the line between nerd and hedonist.

His CNTRL college campus tour combines educational components with partying, although the afternoon session at the University of Toronto served more as a window into his creative process than anything else. And that extra context gave a different angle to his DJ set at Coda later that night.

Hawtin has been at the forefront of new musical technology, but the take-away from his panel discussion was how he uses those tools in relatively simple ways. His set of stripped-down percussive techno was short (by his standards) but highly effective, and perfectly readied the crowd for Mark Houle‘s live set. Houle’s more melodic approach was a great release after the tension built up by Hawtin, and that energy was reflected on the dance floor.