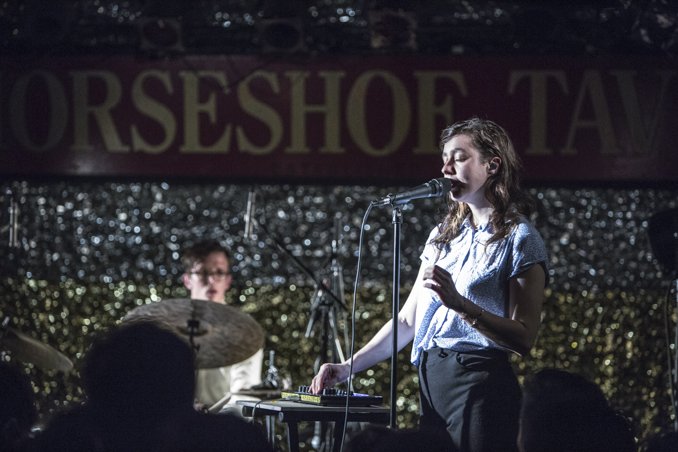 BRAIDS at the Horseshoe, Thursday, May 14. Rating: NNN

One of experimental art rockers Braids‘ many strengths is their ability to produce a larger, more textured sound than the average three-piece. Lead singer Raphaelle Standell-Preston chatted up the crowd before opening with a lush rendition of Letting Go, which also opens new album Deep In The Iris. It immediately established their patient approach, which allows time for each song to build.

Bassist Taylor Smith and drummer Austin Tufts were mixed a little too loudly at times, drowning out Standell-Preston. And the relentless chatter of the crowd prevented songs like Taste from getting a fair hearing. (We’d love to hear the layered tunes at a place like Massey Hall.) Many a band would move mountains to play the Horseshoe, but Braids’ sound is bigger than the confines of that venue.

Happy When saw Standell-Preston slowly sing the intro, but the chatter continued to drown out one of the few glorious moments she had alone in the spotlight. The band stuck entirely to songs from their new record, and you have to commend them for it. Instead of throwing casual fans a bone with older singles, they kept the focus on delivering a sprawling, engrossing set of strong new material.

WILD NOTHING at the Opera House, Thursday, May 14. Rating: NN

Dream pop: it can be transporting and mellowing, carrying you away on waves of guitar reverb and pillowy synths to a place where your troubles are forgotten. Or it can be so innocuous as to turn your daydreaming into actual sleeping.

Wild Nothing‘s variety falls into the latter category. Their Converse Rubber Tracks set at the Opera House was fine – pleasant enough, flub-free, well-mannered. But the Virginia five-piece led by singer/guitarist Jack Tatum and featuring guest keyboardist Colin Caulfield from DIIV, suffers from a serious lack of definition, oomph, force. And in the cavernous venue, anything resembling hooks got washed away.

Watching the mildly swaying band play new songs from an in-progress third record plus some past singles, you weren’t convinced they really believed in what they were doing either. Things grew louder and noisier by the end, causing the young crowd to cheer enthusiastically enough for Wild Nothing to return for one last song.

Both sides merged seamlessly at the Scottish five-piece’s first Toronto show since the 2013 release of More Light, their 10th and best album since 2000’s menacing masterpiece, XTRMNTR. They still sound vital, and although the set list covered several of their stylistic iterations, the heavy, taut, rhythmic energy coming from guitarist Andrew Innes and bassist Simone Butler provided a firm – and loud – anchor.

They opened with More Light’s roaring political psych epic, 2013, and tore through Jailbird, Accelerator and the industrial funk of Kill All Hippies before slowing the pace with the spacey Shoot Speed/Kill Light and reflective Damaged.

Sporting his signature fringe and a leopard-print blazer, once-volatile frontman Bobby Gillespie had an unassuming, effortless stage presence but gathered more determination as the band crescendoed into Screamadelica-era hits and Swastika Eyes. The dude-heavy audience finally woke up and was rewarded with a four-song encore that ended with Stonesy stomper Rocks.

SETH TROXLER, THE MARTINEZ BROTHERS, STEVE LAWLER, PAN-POT and others as part of ELECTRIC ISLAND at Toronto Island, Monday, May 18. Rating: NNNN

The Electric Island series moved this year to a location near Hanlan’s Point to better accommodate the growing numbers and mitigate noise complaints from Island residents. It still feels a bit strange to hear DJs like Steve Lawler and Pan-Pot bang out dark, stripped-down tech house in daylight hours in a beautiful park setting, but it’s a nice change from clubs, and the mood is a lot more chill than at big mainstream outdoor EDM festivals.

Toward the end of Lawler’s set he started bringing to the fore his acid house influences, which went over well with the crowd as the sun started to set. But it was the Martinez Brothers and Seth Troxler‘s three-way DJ set as Tuskegee that really connected with the dance floor, adding unpredictable dynamics with an element of dirty funk. All three are good DJs on their own, but they were even more effective as a trio, and it was clear they were having almost as good a time as the audience.