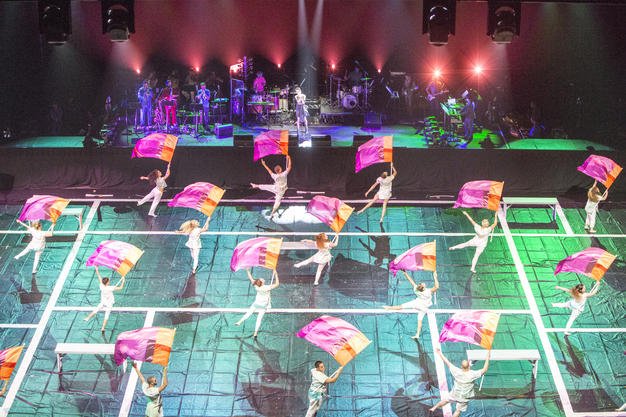 Introducing colour guard to the masses is just the kind of quirky idea we’ve come to expect from David Byrne. In a sparsely filled Air Canada Centre, high school teams in colourful uniforms marched, danced and clambered over props while tossing flags, batons and rifles into the air. Behind them, musicians known for their arty leanings performed commissioned songs full of drama.

About half of the 10 presentations hit hard: the creepy Field of View/St. Vincent collab, the funky Black Watch, superbly sung by Devonté Hynes, the gothic Every 40 Seconds by How to Dress Well/Mechanicsburg HS. Surprisingly, Byrne’s bellowing ballad had little rhythmic thrust, and Nelly Furtado‘s World Premiere was pop overkill.

Best was a radio-style piece by This American Life’s Ira Glass, Nico Muhly and Alter Ego, in which Glass layered teen interviews about the fleetingness of relationships (colour guard ends once you graduate high school) and the power of collaboration. It ended with the Alter Ego team walking up to the audience and staring openly – vulnerably – at us.

That piece came early, and I wish they’d saved it for last. Not just because of its intense emotionalism, but because it wasn’t till we’d learned colour guard history and watched behind-the-scenes footage during between-song switchovers that we’d fully understood why the sport mattered so much to all of them.

Shania Twain can roll out the hits for 100 minutes and charm the crowd with her modesty. But she’s often appeared awkward onstage. Her two-year stint in Vegas has definitely improved her chops, and she seems more comfortable in her body. She’s still not gonna dance her face off alongside a chorus line of buff bodies, though. Instead, video is a key player on this tour, along with tons of dry ice, fireworks and pyrotechnics.

Her band is brilliant but un-introduced, something she should fix. They played their asses off, sang and strode in sync along the stage. It helps that they have a damn good catalogue to work with. Twain doesn’t mess with it, reproducing almost note for note the original tracks. A good thing, too. Otherwise her fans couldn’t have hollered every word and whooped along with her.

An hour in, Twain sat down with a guitar, her band seated in a semi-circle behind her, for an acoustic set that was the highlight – Still The One was killer. That stripped-down segment showcased the best of Twain: great, simple songs sung with heart.

It seems like every time Christopher Owens has played Toronto since his old band, Girls, broke up, he’s attracted smaller crowds and played smaller rooms. That’s somewhat understandable – he’s never been a particularly extroverted or engaging performer. But it’s also a shame, since these days he looks like he’s actually having fun onstage, turning his introversion into something genuinely endearing. Though the Garrison was just over half full, the connection between Owens and the fans was more powerful than ever before.

He’s touring with a much smaller band than he had for his previous album, the gospel-country A New Testament. Much of the set was culled from his recent surprise release, Chrissybaby Forever, which is more like early Girls than anything he’s done solo. It’s some of his strongest material yet, and even the older songs sounded much better when performed with this lineup.

Fickle former fans may have moved on, but those who’ve stuck around are finally getting to see Owens live up to the hype.

It was an unusual pairing: Aussie folksinger Darren Hanlon and local chamber-jazz group Hobson’s Choice. But it turned out to be a good one. At the intimate Burdock, Hanlon was able to go real quiet whenever he fancied. There was no set list he just followed his instincts, playing the stellar Halley’s Comet, 1986 and bluesy There’s Nothing On My Mind off his latest, Where Did You Come From? Lyrically, he can be both deeply complex and really silly. He finished up with (There’s Just Not Enough Songs About) Squash. Most impressive is that alone onstage, he can occasionally conjure a band by pulling out bluesy rock guitar solos and shifting himself right to left, acting like two people.

A different interplay of simple and complex was at work during Hobson’s Choice. The four-piece band often climbed up on big builds, but there were also gentle, calm, even sparse interludes, just guitar or trumpet or vibraphone. They drew from 2012’s Of The Waves, their jazzy cottage-dock album devoted to summer and water. It’s perfect for this weather.