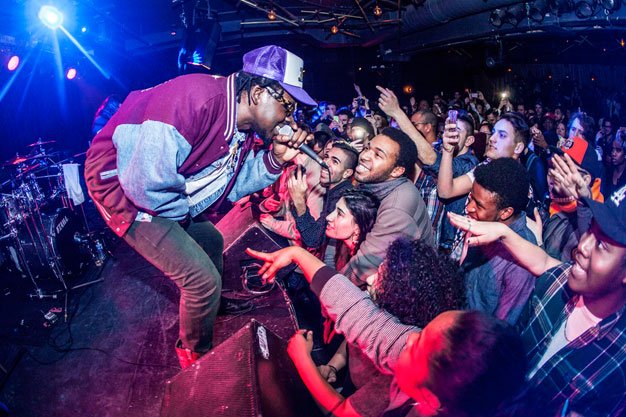 Theophilus London is often described as an eclectic pop musician who skips between genres. He sings and raps, but what he’s really good at is complaining.

“This mic looks pretty beat up,” the New York-based performer announced upon arriving onstage. Then he disappeared.

It was an inauspicious start and the first of many bitchy remarks about the venue that, even if warranted, were clearly calculated to distract from the fact that he was off his game.

No matter how tightly his three-piece band played the gliding funk rhythms off last year’s Vibes! album, nothing could hide London’s raspy, tuneless singing, incoherent delivery and affectless raps. Dressed in an over-sized varsity jacket and sunglasses he never removed, he looked tense and closed off in contrast to his flirty, escapist club music.

Whenever London managed to get a vibe going, he promptly killed it again. Arms were in the air during banger Do Girls, which he followed up by mumbling something and vanishing again, leaving the band to jam awkwardly.

Was this the encore moment? It was hard to tell. And half the audience was long gone.

Nothing makes a rap event less enjoyable than poor planning, and unfortunately for the sparse crowd at the Phoenix on Tuesday, the Rich Homie Quan show was rife with it. The 25-year-old MC didn’t take the stage until 20 minutes after midnight, and fans were by then worn out by classic hip-hop show misdirection – a DJ saying, “Are y’all ready for Rich Homie Quan? He’s up next!” before bringing out several more openers.

Despite the long wait, the crowd livened up when Quan took the stage to his celebratory 2014 hit Walk Thru, and he engaged early on with popular mixtape cuts They Don’t Know and Milk Marie. But it wasn’t long before the room slumped with exhaustion.

To make matters worse, Quan liberally checked his phone throughout his 25-minute set, his eyes most certainly on a clock that counted down the minutes until his contractual obligation was fulfilled. Occasional flashes of the charisma that’s endeared him to progressive rap fans couldn’t speak louder than that.

And if you hadn’t been fully sold on his new album, I Love You, Honeybear, which ups the unabashed romance and minimizes the irony and bleakness of 2012’s Fear Fun, its songs took on greater potency through the seven-piece band, which moved dynamically through lush acoustic folk, lap steel country, epic indie rock and even chilly electronic (when all the guitarists, including Tillman, moved over to keyboards for True Affection).

Tillman gives off a vaguely madman persona – flinging himself atop a kick drum, gyrating while waving his mic stand acrobatically, crooning to the front row from his knees – but actual danger never seemed imminent. His passion came off as genuine and never waned. Things got truly thunderous during bombastic set closer Holy Shit, which saw him wade into the crowd for a long time.

All in all, love looks good on him.

Ariel Pink concerts are inherently difficult to digest and rate. If you view the L.A. avant-garde pop star’s performances as grating, are you just missing the point because of your pedestrian take on experimental music? It can be intimidating panning “art” there’s a chance you’re just not “getting it,” even in the case of Pink’s lo-fi mess.

And yet, here’s a 2N review. Pink opened with the bubbly Kinski Assassin, from 2012’s Mature Themes, changing his vocal pitch as if alternating personas, and then launched into the standout track from last year’s pom pom, White Freckles, a frenzied cacophony of synth and effects. He insisted on louder vocals and more effects, which muddied the already murky mix and made the five-piece band’s sonics blur together. The intricacies of pom pom – layers of alien sounds and strange vocals – were lost.

For the encore, Pink returned fully clothed (he’d stripped down to just black hot pants), brandishing a cigarette. The final song, Jell-O, excited the weary crowd, but it was too little too late.