Prosumer, Pluto and Feast in the East 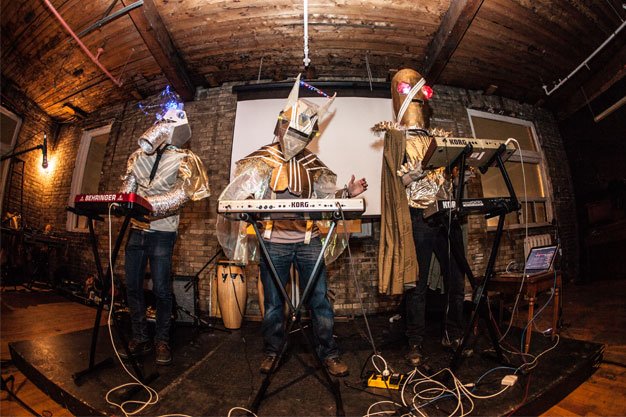 The first Feast In The East of 2015 was big on synthesizers and siblings inside the gorgeous Jam Factory.

Brother duo Barbara took the series’ food theme to heart by incorporating baguettes and broccoli into their act. In chefs’ aprons, they gaily horsed around, threw in some raps and choreographed moves, and sang musical-theatre-style to a too quiet soundtrack of mashed genres. It was too absurd and incoherent for most, though a crew near the front cheered for more.

Matrox, a robot-costumed band led by Digits’ Alt Altman, were the night’s highlight. The purveyors of Daft Punkesque laser funk stood in a line behind their synths body-rocking to detailed songs full of energy and uplift. Their general-appliance-looking costumes were adorable, and they imbued each song with far more sensitivity than you’d expect from a machine-driven band of robots. Fleeting saxophone lines punctuated the repetitive electro grooves, and the final tune was so gently hopeful and happy, it melted winter hearts.

Doomsquad‘s star is on the rise thanks to last year’s Kalaboogie and a recent tour with Tanya Tagaq. Siblings Trevor, Allie and Jaclyn Blumas‘s hypnotic brand of dubby techno is slow-building, at times patience-testing, and terrifically original due to the way they interweave and vary their vocals: harmonizing, chanting, singing cleanly or darkly warped by effects. Bongos, flutes and barefoot dancing ensued, and it all reached a surprisingly thunderous climax.

For dedicated house and techno heads not content to wait till New Year’s Eve for a dance floor experience, there was the third night of the Drake Hotel‘s annual What’s In The Box festival.

Brooklyn house producer Galcher Lustwerk‘s mixes are acclaimed for their introspective take on deep house, while his eclectic club playlist conjured a grimier side of New York City that seemed of another era. He resisted the obvious builds and drops for a pleasantly horizontal mix that skipped between jacking house, clanging acid and B-more. His occasional gruff spoken-word vocals and raps added nicely to the vintage house vibe.

Toronto’s Egyptrixx (aka David Psutka) followed at midnight with a nose-to-the-grindstone set of pounding minimal techno amplified by sci-fi noises and a dude in the back making shadow puppets with a strobe light. The mood was cold and austere, better suited to a late-night warehouse, though he managed to silence the chattier dancers.

Chicago’s DJ Spinn switched up the mood again with his juke and footwork reworkings of recent hip-hop hits. He paid tribute to his late collaborator DJ Rashad and followed with a crowd-pleasing set of grimy bass and pitch-shifted hip-hop hooks that tumbled out of the speakers at warp speed.

Box of Kittens and Breakandenter’s Boxing Day party at Club 120 hit capacity long before Edinburgh-via-Berlin DJ/producer Prosumer stepped onstage, a sign that either his new DJ mix for the Fabric series is expanding his audience or a lot of Torontonians really wanted to dance off their holiday meals. Either way, the room was receptive to his eclectic selections, which bounced from techno to disco to house and spanned eras of underground dance music.

Prosumer (aka Achim Brandenburg) is known for preferring to play vinyl. While many laptop-generation DJs might consider that format limited when it comes to performance possibilities, he makes a strong case for the medium by keeping the focus on track selections and smooth, unobtrusive mixing (despite a couple of needle skips here and there). His ability to drastically shift moods without jarring us made it hard to leave the dance floor. He kept finding new ways to connect genres and keep us on our toes, literally and figuratively.

Anticipation was high at a jam-packed Sneaky Dee‘s for emerging R&B singer Pluto‘s first Toronto headlining show with a full band, but technical difficulties – so much feedback – caused delays.

Though the young Scarborough musician eventually appeared to huge applause, sound issues continued to interfere. His band was indeed full: so loud that the singer had trouble rising above the trumpets, bass, synth, drums and guitar.

On record, Pluto’s sound is minimal and sensitive enough to evoke Rhye, but he was in full-blast mode live, and his higher-register voice didn’t hold up. Despite the pitchiness of his falsetto, he went for it every time with admirable tenacity.

Earlier, Scarborough rapper Luu Breeze delivered an energetic but far too short set of confident, trippy singalong hip-hop that had the crowd doing just that. Peace To The Gods, from his recent Goodbye Farewell Remember EP, was a standout.