The Scene: Ibeyi, Hayden and Lids 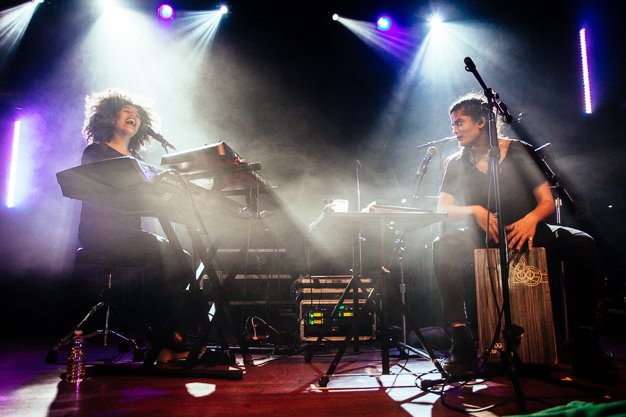 French-Cuban duo Ibeyi performed alone on the big Mod Club stage, but the twin sisters had more than enough presence to command the room. The stripped-down arrangements on their self-titled debut were emphasized even more in the live setting. Some songs were performed completely a cappella, others embellished only with subtle piano lines by Lisa Diaz, with Naomi Diaz tapping out hip-hop-influenced beats on the cajón and the batas.

That acoustic approach was effective enough, but when Naomi drummed out additional electronic percussion from trigger pads, the songs sprang to life and got the crowd moving. There’s something undeniably powerful about the twins standing alone on the stage, and their voices blend in a magical way only sisters seem able to pull off. Still, much of their material seems better suited to soft-seat venues than rock clubs. The electronic elements added a lot, but often felt like afterthoughts and could be developed further for performances.

Those who squished into Caplansky’s deli Tuesday night to see Hayden were lucky in more ways than one: not only did they get into an exclusive, super-intimate gig – and on the very day his new album, Hey Love, dropped – but the folk rocker woke up with the flu the next morning, causing him to cancel his other two diner shows.

Additionally, Hayden brought along a three-piece band that included local star players Taylor Knox, J.J. Ipsen and Jay McCarrol, who dynamically – and sometimes dramatically – brought to life songs that spanned his career. The set list was chosen by audience members from a “song menu” given to us as we walked in. (Publicists are so ingenious these days.) Things started mellow and quickly built up to rock levels by fifth song The Hazards Of Sitting Beneath Palm Trees from 1998’s The Closer I Get.

Between tunes, it took Hayden some time to put on his glasses and peruse the suggested selections, which occasionally halted the momentum. But it also left room for lighthearted banter between the band members, self-deprecating quips from the man of the hour and audience interaction. When he completely lost his way during a solo acoustic version of the heartbreaking I Should Have Been Watching You, fans jumped in to Google the lyrics for him.

“As the shadows reach for the bar / The place turns yellowish-like,” someone called out. “Oh my god, that’s beautiful,” Hayden said, to huge laughter and applause.

Shaun Brodie and his Queer Songbook Orchestra had a genius idea: present a concert of new arrangements of songs while also mining the personal stories and queer histories behind those well-known pop tunes.

At the Church of the Holy Trinity, the superb pop ensemble played backup to consistently fine singers including Alex Samaras, Sienna Dahlen and Ghislain Aucoin. But the highlight of the night was an exquisite instrumental mashup of Tchaikovsky’s Sixth and Joe Meek’s Telstar. Adding to the impact were projected visuals made on the spot by a team headed by Sean Frey.

But the storytelling element was weak. An explanation of how the bridge in Melissa Etheridge’s Come To My Window took on new meaning when she came out was followed by a modernist version of the song in which the bridge was almost completely lost.

Lorraine Segato was an engaging narrator, but Sanjay Ratnan couldn’t string a sentence together. And Brodie’s information about the venue’s connection to queer history could have been better integrated into the evening. Actually, the bandleader might think about ceding hosting duties to someone more comfortable onstage.

But the concert itself, even though it stuck mostly to ballads, was sensational. Don’t miss the next instalment, a tribute to Duke Ellington collaborator Billy Strayhorn on June 21.

At their 7-inch release party for Sarsfest, Toronto’s newly formed, much-hyped LIDS (containing Holy Fuck’s Brian Borcherdt, Constantines’ Doug MacGregor and Metz’s Alex Edkins) seemed more off-the-cuff than openers Mimico, who are a well-oiled psychy Krautrock machine. Sure, a few more practices might have smoothed out transitions and some wonky vocal effects, but LIDS still showcased the non-formulaic mix of pulsating synth, distorted guitars and grinding drums that anchors each song as it ambles through post-punk, woozy math rock intricacies and electronica. That’s a lot of buzzwords mashed into one sentence, but rest assured, LIDS are wholly originally – even slightly eccentric.

This side project seems to give the trio a chance to experiment with noises usually off-limits in their primary bands, and that translated into unbridled energy that overflowed into the crowd. Not that the crowd needed converting: the venue hit capacity early on, halting anxiously waiting concertgoers on the narrow staircase leading up to Double Double Land‘s main room. With their regular gigs likely consuming much of their time, who knows if LIDS will follow the regular indie rock band cycle? But even if gigs and releases are few and far between, they’re definitely worth waiting for.