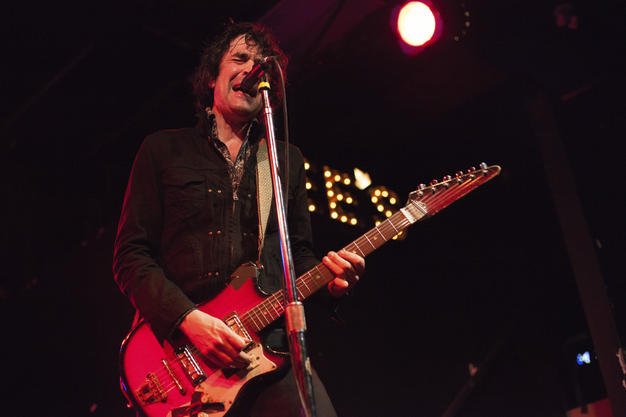 With an American flag defiantly hung length-wise behind them, the Jon Spencer Blues Explosion tapped into brashness for an uncompromisingly loud, obscure set at Lee’s Palace.

They piled on a slew of new and rare stuff. Covers like She’s On It by the Beastie Boys and the eponymous Bo Diddley alternated with electrifying songs from 2015’s “it’s complicated” NYC love letter, Freedom Tower, and the odd classic (mostly from 1994’s Orange). Working as always without a set list, Spencer called out songs with no intention of placating the tourists.

Guitarist Judah Bauer remains a tranced-out stoic (even when busting Beck’s verse from Flavour), drummer Russell Simins is a mountain sending boulders rolling into beats, and Spencer is as James Brown as James Brown. He sweats, swings and preaches, the once-in-a-lifetime showman that punk rock is blessed to have in its midst.

The second night of the Sound Séance I festival at Geary Lane got started a bit late, but that meant there was already a decent crowd for the jazzy new wave of openers, Jay Holy and chugging drone rockers Mimico. Montreal’s Technical Kidman were much more emotionally intense than their name suggests and put a lot of showmanship into their swirling psychedelic electronic pop.

The Toronto debut of the new collaboration between Montreal’s Suuns and Jerusalem in My Heart was easily the set of the night. Suuns on their own are already a great synth punk band, but the addition of JIMH’s Radwan Ghazi Moumneh bumped things up to a whole new level, bringing an avant-garde approach to Middle Eastern influences into the mix.

Together, their command of dynamics, rich textures and hypnotic rhythms made for a dramatic, memorable performance.

FLORENCE & THE MACHINE, NAS, BANKS and more at BESTIVAL, Friday and Saturday, June 12 and 13. Rating: NNNN

A formidable legion of weekend hippies descended on Hanlan’s Point to “increase the peace” at Toronto’s inaugural edition of Bestival, a celebration that originated across the pond of dancey music, sparkly makeup and excessive set pieces.

Although the sights on the grounds were almost able to compete with the acts onstage, a collection of stellar international acts satisfied by bringing the (mostly) thumpy noise that attendees were itching for.

Jamie xx, fresh off his critically acclaimed new record, In Colour, slayed a mud-covered crowd on rainy Friday afternoon at the Bollywood Stage. Wavves singer Nathan Williams confessed to being high on ‘shrooms in the middle of their sunny scuzz pop set. But the highlight was the brilliant Florence & the Machine, a band that’s built to lay ruin to festival stages. They didn’t disappoint. Their late set, with Florence Welch bouncing all over the stage and even up onto the scaffolding, was easily the weekend’s high-water mark.

Saturday brought much-needed sunshine, and the beach “stage,” just a fence away from nude beachcombers, finally got some proper use. Banks‘s sultry R&B was razor-sharp on the main stage, followed by Caribou‘s well-oiled electro-grooves.

The cherry on top was Nas‘s high-energy set of inimitable East Coast hip-hop bangers. On a bare stage, he hypnotically commanded attention thanks to charismatic banter and timeless tunes. The crowd had thinned out to avoid ferry chaos, but those who stayed hit a fevered apex.

Despite some very harshed mellows (ferry transportation to and from the Island was a total nightmare), the first Toronto Bestival was mostly a blast.

Fisher, in a Wu-Tang T, was on from the get-go, as was keyboardist/bassist/computer-noise-maker Ryan Mahan, whose ferocity often crossed into unhinged territory. (Not a lyric went by that he didn’t holler.) Squalls of instrumental noise often rose and fell unpredictably. It was impactful for half the set, which consisted of songs from their just-dropped self-titled debut, but grew wearying.

Near the end, though, they did a 180 and got quiet and minimal for a hymn-like song full of low backup humming, punctuated claps, Clapton-level-beautiful guitar lines and Fisher’s soulful voice, ragged from giving it so hard night after night on tour.