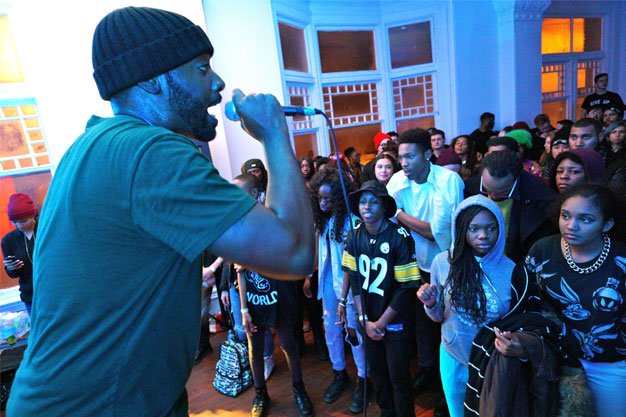 The third year of Toronto’s monthly November-through-March concert-cum-art-show, Long Winter, kicked off on all levels of the Great Hall. Subterranean talk show Long Night With Vish Khanna featured Trillium Book Award-winning poet Souvankham Thammavongsa reading from her newest collection, Light, and a stripped-back performance by Basia Bulat. And although surprise guests are the norm for Long Night, the audience was genuinely elated by the appearance of this year’s Giller Prizer winner, Sean Michaels.

Only the venue’s main room was licensed, meaning there was a winding line to get into the only place where you could buy a beer and catch the headlining performances. But once they got in, Lee Paradise treated the crowd to a rowdy performance of his droning vocals over Halloween funhouse melodies.

Because of the Great Hall’s strict parameters, small capacity and overzealous security guards, the night lacked fluidity and a carefree feel. Here’s hoping Long Winter can iron out those kinks in the coming season, because it’s destined to be a Toronto institution.

Alt-J, the Leeds-based, Mercury Prize-winning indie rock band named after the keyboard shortcut for the Delta sign, returned to Toronto Tuesday night to promote their two-month-old sophomore album, This Is All Yours. And while the set was heavy on the new stuff, the four-piece made sure to give the crowd what they wanted: the top-40 hits from their 2012 debut, An Awesome Wave.

The Kool Haus was filled with a diverse mix of concertgoers – a prepubescent boy atop his father’s shoulders, stoners sneaking a puff, couples grinding, and spirited interpretive dancers – which speaks volumes about alt-J’s widespread accessibility. Neat, considering the band’s music is stuffed with fast-talker singing, dark tribal rhy-thms, piercing synthesizers and choir-boy harmonies.

They admit to being more a studio band than a live act, but even so they lacked the energy you’d expect from a constantly touring group. Singles like Tessellate and Matilda were musically sharp but felt flat and robotic. Not that that bothered the crowd they ate it all up.

Alt-J ended their encore with Breeze-blocks, their biggest song to date. People sang along word for word, throwing up their arms in praise.

The hometown crowd gave PartyNextDoor an enthusiastic welcome when he appeared onstage at 10:30 pm, capping off his North American tour. It was clear from all the lyrics being shouted line for line that PartyNextDoor Two, the artist’s second effort, has served as the soundtrack for much of our summer as well as the fall.

Performing material from that release as well as his self-titled debut mix-tape, the artist, whose real name is Jahron Anthony Brathwaite, wasted little time on small talk and pleasantries. Save for a too quick Persian Rugs serenade – to a fan pulled onstage from the audience – one track rolled straight into another.

The Mississauga native said he wished he had more material to perform. His earnest promise to continue making quality music was endearing and helped make up for a shorter than expected set.

He brought out fellow Canadian, rapper P. Reign, to perform Realest In The City, and then, to close out the show, Drake joined his protege for their song Recognize. It’s a credit to PartyNextDoor’s growing stage presence that the guest appearance helped to complete the night rather than eclipsing all that came before it.

It’s a bit of a mind fuck to see talented women devoting their musical lives to playing songs written by already overglorified male “rock legends” who slightly switch places with each other in Classic Rock Magazine annual top-100 lists.

Vag Halen are angrier and more art-school. They follow up Sabbath with Van Halen, Guns N’ Roses with Nirvana in a set list that makes little sense historically or stylistically. Undeniably choice tunes, though, that the large crowd ate up. The needlessly large ensemble performs rather grimly but Vanessa Dunn’s low, sexy vocals, see-through outfit and raunchy persona stole the spotlight.

Actually, guest performer Kitty Neptune stole the spotlight. Her no-holds-barred striptease with an audience volunteer during VH’s reliable cover of I Put A Spell On You gave the set a jolt of danger, subversiveness, shock and hilarity. That’s what Vag Halen do best: taking classic rock hedonism and turning it on its head.