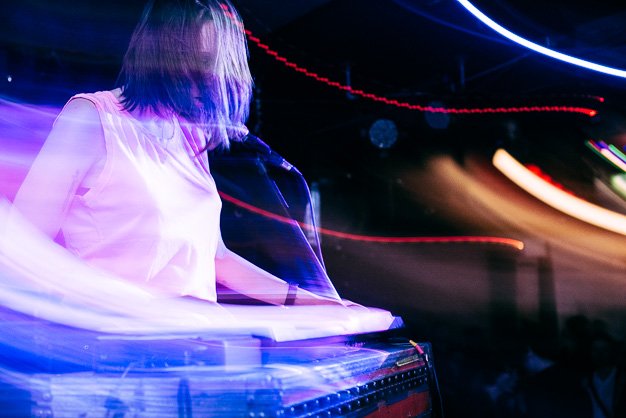 PRINCESS CENTURY, A DREAM, A COAST and NYSSA at the Garrison, Friday, April 24. Rating: NNN

Those expecting Princess Century‘s darker, more sinister side got a surprisingly melodic, dance-floor-focused set. Born Maya Postepski, the member of operatic dark-wavers Austra effortlessly manipulated Korgs and Moogs all night, with a laptop perched behind her and psychedelic light projections glowing over top.

“I’m sorry these songs are so sad,” she told the dancers near the front of the stage, who clearly didn’t mind at all. So much so that when she played her final song, the crowd booed loudly. Encores are rare in electronic music, but Postepski was game, offering up a complexly arpeggiated song she’d just written while in Texas for SXSW.

Earlier in the night, we also got new music from Nyssa and A Dream, A Coast. In fact, it was the latter’s first show, and they premiered tunes from an album tentatively set for release this fall. Band leader Aimee Bessada has been working and recording with Linda Perry in L.A. for the last few years, and the resulting songs are hooky without being sugary (thanks in part to Bessada’s deep vocals), and keep musicianship high.

Stenton performed live, following an extended opening set by Hot Box resident DJ Jamie Kidd. Stenton’s work is on the minimalist side, with subtly evolving polyrhythms and hypnotic tinkling, metallic percussion melodies. The mood is a little meditative for prime time, but since the club was just starting to fill up, it worked well as a transition into headliner Graze‘s set.

Graze are New Kanada label head Adam Marshall and Christian “XI” Anderson, who combine disparate influences into a sound that spans multiple eras and genres of underground dance music. They’re rooted in the sonics of techno but wrap that around a much wider variety of rhythms than the standard four-on-the-floor stomp.

They also opted to perform live instead of DJing. While that approach gave us a window into their process and dynamic, it came at the price of some spontaneity and energy.

After a quick but impressive set by Sam Cash (sans Romantic Dogs), Terra Lightfoot stepped up to the plate and smacked it outta the park. Why she was so early on the bill is beyond logic, but she delivered hard-earned blues rock and a furious, fantastic cover of Leadbelly’s Where Did You Sleep Last Night.

From there, Skydiggers played first as a duo, then backed by Peter Elkas and his band, ending with their own mic-drop moment on A Penny More. Elkas took over with his well-honed rock ‘n’ roll, joking that it’d be an honour to play with headliner Jake Clemons, nephew of the late Clarence Clemons and member of Bruce Springsteen’s E Street band, who was visibly waiting in the wings. This led to a completely spot-on cover of the Boss’s Spirit In The Night.

Springsteen regularly performs at Light Of Day benefit concerts, so Clemons’s presence made sense. But despite his incredibly talented players and some great tunes, he went on much too long, with an almost 20-minute band intro. A word to the wise: less is more. Way more.

In the wake of the Raptors’ abysmal elimination from the playoffs, Shy Girls – the moniker of Portland-based R&B pop vocalist Dan Vidmar – offered just enough slow jams for a healthy dose of wallowing.

Surrounded by three tables of electronics helmed by his backing band, Vidmar mesmerized the half-full room with his vocal prowess. Sensual and powerful, cascading from falsetto to low and brooding, his voice is his strongest weapon, carrying each track through thick bass lines. The one-hour set of songs mostly from his recent mixtape, 4WZ, marked Shy Girls’ first show in Toronto – but likely not his last. As Vidmar crooned “Your lips are under attack” over moody, foreboding beats, he had the crowd hypnotized.

Starting the night was Brooklyn’s Young Ejecta, aka former Neon Indian vocalist/keyboardist Leanne Macomber and Joel Ford, Oneohtrix Point Never collaborator and half of Ford & Lopatin. But Ford wasn’t at the show, leaving Macomber alone to sing over backing tracks. With her feather-light vocals, she made the best of the situation, adding some modern dance choreography and even ASL-signing parts of the song Your Planet.