NOW MagazineMusicConcert reviewsThe Scene: Screaming Females and At The Gates

The Scene: Screaming Females and At The Gates 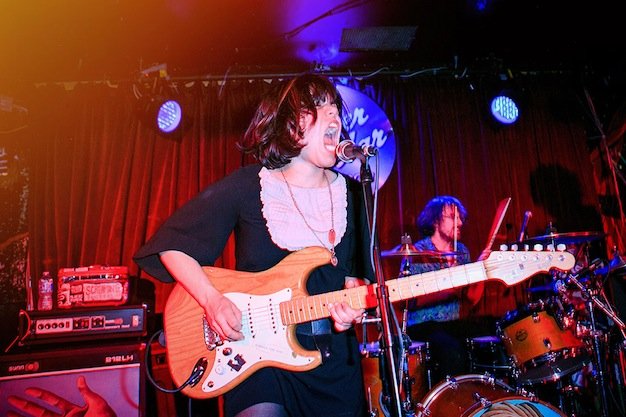 It’s one thing to listen to Screaming Females‘ fiery power punk on record and quite another to see the trio pull it off live. Marissa Paternoster is far and away the star of the show – a six-string sorcerer pulling off jaw-dropping, speedy fretwork wizardry while hollering hooky melodies. She’s unstoppable, backed by a competent, much less flashy rhythm section.

Songs are catchy, ferocious and to the point, and the New Jersey three-piece packed a ton of them into their headlining set at the Silver Dollar, a follow-up to their opening slot for the Julie Ruin one year ago. They stuck mostly to material from their sixth album, Rose Mountain, with Paternoster also taking requests. That move helped with crowd interaction but pushed the set length toward the too-long side. A person can only take their sonic bludgeoning for so long.

Cape Breton natives Mardeen – cited by Alvvays’s Molly Rankin as a major influence and whose pop gem Telephones was covered by Mo Kenney on her recent album – played smart power pop earlier in the night for a large crowd who only partially returned the love. Their insider-joke banter fell a bit flat, but their guitar rock is exceptionally muscular, brilliantly melodic and full of arrangement twists and biting lyrics. Get on board, people.

AT THE GATES with CONVERGE, PALLBEARER and VALLENFYRE at the Phoenix, Wednesday, April 8. Rating: NNNN

Remember those shows you went to in high school, where there was a metal band, a hardcore band, a different type of metal band, a band you got there too late to see? Then imagine each of those bands was the best band in that genre. That’s this year’s Decibel Tour.

For those of us who’ve seen At the Gates play the same greatest hits for years, hearing new music from last year’s comeback At War With Reality was a pleasure. But the crowd got rowdiest for songs from 1995’s Slaughter Of The Soul, one of the best metal albums ever (one of the best albums ever).

Converge were also awesome, even if singer Jacob Bannon couldn’t quite hit those melodic highs on closer Jane Doe. Shout-outs to local heroes Burning Love, Fucked Up, Sacrifice and No Warning made the show extra-special. Sure, it scans like hometown crowd pandering. But we’ll take it.

With both Mammoth Cave founders (Tough Age bassist Paul Lawton and Fist City guitarist Evan Van Reekum) appearing on this double bill, the show could have been an occasion to commiserate over the label’s closure in February. No one seemed to be concerned about looking back, though, and it’s clear that the label’s folding hasn’t blunted its founders’ momentum.

The evening opened with a drum-slugging, hard-jangling set from Apeshit Simians, anchored by Fogerty-via-Royal-Headache vox and trash-surf instrumental breakdowns. The treble-searing set was a good palate conditioner for Wrong Hole‘s dank vibes, a dark rush of guitar and keyboard riffing with PA-shredding stunt vocals and a rickety drum machine seemingly stuck on 160 bpm.

Fist City, familiar to most of the crowd as one of the best trashed-out rock bands in the country, surpassed already high expectations with new songs that showcased unprecedented ferocity and control. They could have easily have blown out a room five times the size of Johnny Jackson.

Out of their scorching tailwind, Tough Age hurled gorgeous slabs of enthusiastic guitar bliss, showing no signs of having undergone a recent reconfiguration with former members of the Ketamines. The night’s agenda was resolutely focused on not giving a single fuck about the past, and recklessly but determinedly steamrolling into the future.

Country music star and proud Texan Kacey Musgraves, along with a five-piece band in light-up western suits, charmed a sold-out crowd at the Danforth Music Hall with an hour and a half of fiery tunes and magnetic stage presence.

Through clouds of incense, Musgraves eased into things with Silver Lining before shaking up the rowdy crowd with Blowin’ Smoke. “I don’t know what you people do up here in Toronto,” she said. “But I hope it involves getting a little weird.”

“Weird” is an uncommon descriptor for most country music, but the sight of neon cacti flanking her during a down-home singalong cover of TLC’s No Scrubs is definitely not what you’d expect from a country music show.

Musgraves and her band are so super-pro that there’s not much room for spontaneity, aside from her banter. During the last tune, she got tough with a loud drunk – “Don’t fuckin’ ruin it for everyone else” – but for good reason: she gifted us with an unplugged, a cappella version of the Roy Rogers and Dale Evans classic Happy Trails.