The Scene: Sleater-Kinney and Behemoth 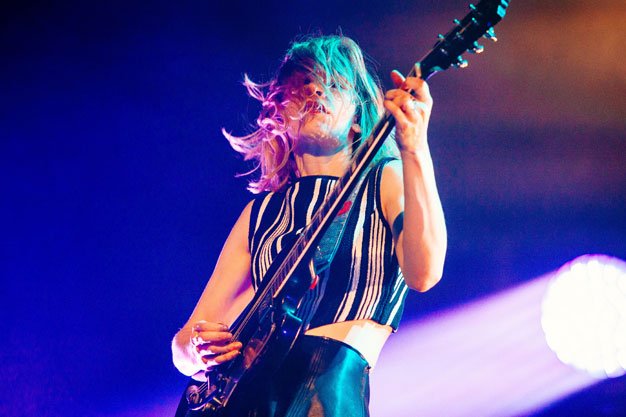 You don’t go to a Sleater-Kinney concert to have a blast. The music is too difficult to relax into – because it is difficult, unrelaxed music: constantly-on-the-move guitar lines, hard-sung vocals restlessly shared between co-singers/guitarists Corin Tucker and Carrie Brownstein, a nervy post-punk sound set against feminist lyrics with things to say. The Pacific Northwest trio work hard at every turn.

You go to throw gratitude and reverence toward rock heroes (and, for some people, a Portlandia star) who have done things their own way, including making challenging music that doesn’t sound like anybody else’s. You go to stand on your tiptoes to see powerful Janet Weiss pound away at her kit while blowing into a harmonica.

Aided intermittently by guitarist Katie Harkin (because why bother with a bassist when you can have THREE guitarists?), the trio easily executed the high-stress songs. They played eight of the 10 on bracing new album No Cities To Love, each proving that the band’s songwriting prowess – like their rep – has only increased during the eight-year hiatus.

Old tunes kept pace, particularly 2005’s Entertain and 2002’s One Beat, during which Brownstein pulled out some St. Vincentesque robot moves. And how do such anti-slackers handle an encore? By playing six songs, wide smiles on their faces. It almost made us forget about getting home from far-flung Sound Academy. Almost.

Metal is, factually, the best music. It’s impossible to understand how anyone wouldn’t like Poland’s Behemoth – one of the most inventive, entertaining, soul-shattering contemporary metal acts, legit Satanists all – or how anyone could hear them (or see their lavishly appointed stage show) and wrinkle their noses like Mom trying sushi for the first time, going, “Ooh, not for me.”

Behemoth’s blackened death metal has expanded over the past 25 years to enfold pretty much every type of metal. They rip flawlessly through howling solos, chugging rhythms and Latin invocations to Lucifer. Cloaked and corpse-painted at the Phoenix, they opened with Ora Pro Nobis Lucifer from last year’s incredible The Satanist. Then they tore through a back catalogue of mostly recent-vintage bangers like Conquer All, Slaves Shall Serve and Ov Fire And The Void.

Criminally, Behemoth were opening for big-name Buffalo death metal act Cannibal Corpse, which is kind of like double-billing The Godfather Part II with Fight Club. It may be uncharitable to say that Cannibal Corpse sucks. Maybe their music – flat, boring, macho in a scowling, thick-necked way yet spiked by juvenile lyrics about dismemberment, putrefaction and corpse rape – just isn’t attuned to my palate. So I’ll wrinkle my nose and mutter, “Not for me.”

Rap’s underground is an increasingly segregated place in 2015. Part of it is populated by animated rappers primarily from the South largely powered by style and trendy rap-cum-lifestyle blogs. Then there are austere traditionalists who dabble in retro revivalism, like newcomer Your Old Droog and veteran Royce da 5’9″, whose pairing with legendary golden-age producer DJ Premier (together they are PRhyme) has revitalized both musicians.

At Tattoo, the old heads were every bit as lively as their excitable counterparts. Your Old Droog emerged in 2014 with a revivalist intensity so deep, rumours abounded that he was Nas performing under a pseudonym. Live, he rapped passionately over classic instrumentals like DMX’s Get At Me Dog, cracking wise about the border and exuding a nerdy charm.

Royce da 5’9″ and DJ Premier got a hero’s welcome, turning many in the screwfaced audience into unabashed fanboys. They ran through cuts from their complex eponymous release with zeal, and Royce dipped into his Bad Meets Evil catalogue with Eminem, moving with the confidence of a superstar. The pair’s chemistry was palpable both clearly revere each other and said so several times.

Critics of this throwback style sometimes chide its makers for their 90s nostalgia. To the 500 or so ravenous fans at Tattoo, PRhyme delivered just that. And nothing else mattered.

Kaki King‘s current show is sonically simple – just King and her white Ovation acoustic guitar – and visually stunning – a whimsical light show is projected behind her and onto her guitar. The Neck Is A Bridge To The Body is “for the guitar about the guitar by the guitar,” she said at the end of her set at Geary Lane.

But up to that point, she let the instrument do all the talking. In near darkness in front of a large screen, she sat strumming, plucking and tapping its strings, striking, rubbing and scratching at its body, her playing emphasizing rhythm as much as melody. The all-instrumental “soundtrack” was mostly soft, complexly coloured and precise.

The projections ranged from whorls of light to threads of colour dripping down the guitar to snow imagery and bleak gas stations at night on the screen. Just as heaviness was setting in, the guitar told its (and King’s) life story through funny projected text about its struggle to find a way to belong, with its “New Age finger music,” in a world full of cool, fuzz-rock SGs.

The tangent added levity to the night and helped the large crowd connect with the woman so fully at one with her six-string.

Local folk-rock kingpin Hayden appeared calm as he worked his way through a set of old standards and tracks from his upcoming release, Hey Love, on Massey‘s stage. His dry sense of humour was on display, and he perfected a balance between scrappy uptempo numbers on guitar and introspective tracks at the piano.

He told more personal stories – like one about his non-verbal young daughter – than ever before, and it was difficult to keep a dry eye before No Happy Birthday. Bass Song from 2002’s Skyscraper National Park was as chilling as ever, complete with a frantic, rousing, delightfully off-key waltz of a finale.

In contrast to Hayden’s understated manner, Dan Mangan + Blacksmith went for a theatrical approach. Mangan has embraced his role as an Indie 88 mainstay, keeping things slick on heavily orchestrated Club Meds track Vessel. But where Hayden seemed perfectly unfazed on the legendary stage, Mangan struggled to settle in.

Mangan and his Blacksmith band of experimentalists are making every effort to escape the cuddly, nice-guy rock tag with darker, more haunting tracks. But the strange turns (including an awkward trumpet solo) his set took, particularly during tracks from Club Meds, were distractions more than intriguing tangents.