TANYA TAGAQ at the Great Hall, Thursday, November 6. Rating: NNNNNIf you had any remaining doubts about whether Tanya Tagaq. 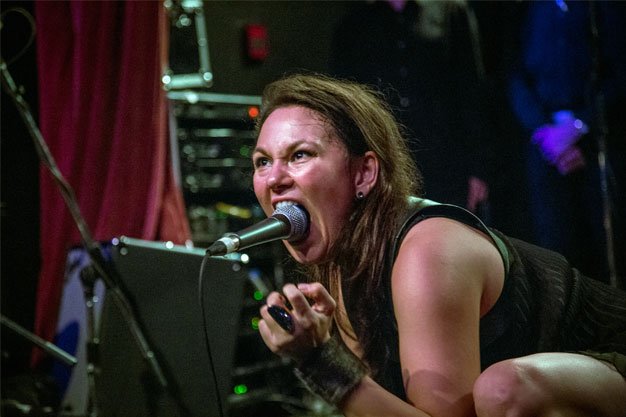 If you had any remaining doubts about whether Tanya Tagaq deserved to win the Polaris Music Prize this year, witnessing her intensely visceral performance at the Great Hall on Thursday would easily have erased them. The career boost of that win contributed to the shows move from a smaller venue, which allowed the several dozen members of the Element Choir to join her onstage, making it an even more powerful experience.

Her strong connection with the crowd was immediately evident, even when she was just talking. She got big cheers when she mentioned shes considering moving to Toronto, as well as laughs when she talked about how much she loves her period. That easy confidence is nothing compared to the formidable power she summoned up once she started the rhythmic grunting and eerie overtones of her avant-garde recontextualizing of traditional Inuit throat singing. She makes the sounds of vomiting, growling, orgasms, childbirth, mourning, joy, fury, defiance and ecstasy seem musical and inspirational. Tagaq easily held the audiences attention with the sheer toe-curling, spine-tingling physicality of her spiritual performance.

Somewhat sheepishly, Afie Jurvanen, aka Bahamas, admitted that his hometown appearances have become rare. Hes been busy touring the States dive bars in places like Boise, Idaho. But at the Toronto launch for his third album, Bahamas Is Afie, he was literally and figuratively at home.

Backed by a streamlined band, Jurvanen was in top form, his voice rich and full of feeling, his guitar parts as catchy, wound-up, free and occasionally cheeky as ever. Backup vocalist Felicity Williams riffed off his guitar, and caught more than a few moments in the spotlight. During a three-song solo set, Jurvanen dusted off Lonely Loves and Sunshine Blues from his 2009 debut, Pink Strat, and got into storytelling mode. He was so charming, he made the Barr Brothers seem shy by comparison.

The Montreal bands eight-song opening set was very good despite less than perfect sound and its short duration. (The band and Bahamas are trading off headlining nights.) They fit in as many songs off their wonderful new album, Sleeping Operator, as they could. The full dynamics of the tunes were explored live Come In The Water opened up to the point of exploding.

Getting a Koerner Hall crowd out of the cushy seats and dancing in the aisles is challenge enough. Getting people on their feet and then filling the stage is even more impressive.

Benin Afropop legend Angelique Kidjo and her four-piece band were tirelessly energetic on Saturday night. The impromptu show-ending dance party came after an hour and a half of their cajoling the room to let loose.

But the most compelling moments were when Kidjo stood still and her guitarist traded his electric for an acoustic. Kidjos clear, calming vocals which at times competed with the band were finally front and centre. A song from the perspective of a 13-year-old girl crying for help before marrying a man older than her father was poignant and powerful.

Between songs, Kidjo delivered messages of female empowerment about teenage pregnancy, genital mutilation and women being the first casualties of war and the last ones at the table during peace negotiations.

DJ Sneaks annual birthday celebration always draws 90s party people out of the woodwork to dance the night away to the house legends music. While hes been based in Toronto for many years now, Sneaks still rocking the classic filter disco house sound he helped pio-neer back in Chicago, which went on to be a huge influence on early Daft Punk. The current generation of heads might know him more for his regular social media fights with younger EDM superstars, but its his talent for layering funk loops on full display Saturday night that fills the clubs.

This year had less of a purist house feel, thanks to the booty bass and breakbeats of Miamis Jesse Perez, who warmed up the crowd. Afterward, San Franciscos Doc Martin took over the decks for an extended back-to-back set with the headliner. The two veterans were clearly feeding off each others energy, and the tag-team DJ arrangement definitely made the most of their chemistry. Not a lot of surprises, but a solid back-to-basics house music party.