The Scene: Zaum, Travis Scott and the Barr Brothers 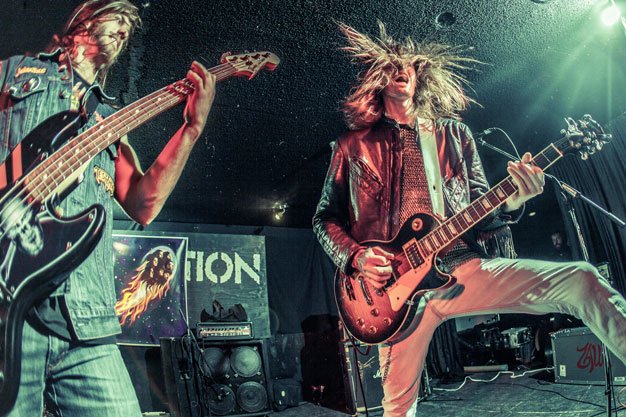 Mokomokai boasts John Ellis, whose pipes can scale Dio heights and then clench the end of a line with a thrillingly nightmarish Halfordian screech. He can also rock a chain mail shirt. While the power trio held the interest of the small Coalition crowd, it was mostly final song/single Poison Whiptail that seriously got us going.

Flying Fortress‘s two members come from recently resurrected Goat Horn, and they could benefit from nailing down a more unified sonic vision. They injected interesting blasts of general noise into their set, but aside from the through-line of distorted bass and thunderous drums, each song charted a different course: crusty punk, sludgy groove metal, incongruously bouncy pop.

Atmosphere – both sonic and scenic – is fundamental to headliners Zaum, evidenced by their carefully placed Zaum candles and full-blast fog machine. The Moncton duo call their music “Middle Eastern mantra doom” their songs are heavy, lengthy and hypnotic, growing spellbinding when sitar and synth weave through and when Kyle Alexander McDonald‘s distant vocals move into chanting territory.

In near darkness, the doom dirges were given shape by heavy hooks and Christopher Lewis‘s intermittently slamming drums that occasionally took the un-interactive performance toward beautiful heights.

Burgeoning superstar Young Thug didn’t make it into Canada for his Danforth Music Hall show, but openers Metro Boomin’ and Travis Scott lived up to the hype.

Metro Boomin’, a 21-year-old Grammy-nominated producer from Atlanta, took the stage alongside Scott’s DJ, OG Chase B, to loud cheers from a restless audience. “We in the 6, right?” he said, before launching into Energy from Drake’s If You’re Reading This It’s Too Late. Pitch-perfect song selection marked his 30-minute set, which also dipped into Gucci Mane’s oeuvre and crowd favourites U Guessed It and All Day. Metro and Chase B stalked the stage like seasoned vets, seeming to have as much fun as the sold-out crowd.

When Scott stepped out to the strains of the WondaGurl-produced intro of his excellent Days Before Rodeo mixtape, the night hit a climax. He had the aura of a superstar, quickly demanding a mic stand. During gargantuan hit Quintana, hordes of teens started mini-mosh pits and leapt around screaming the lyrics.

Scott controlled things like a deranged bandleader, pogoing from one side of the stage to the other, demanding that no one be a bystander and excoriating security guards for kicking out crowd-surfers. He thrilled the audience by bringing out the Weeknd (Abel Tesfaye) late in the show for Often and Drinks On Us – another surprise in a night full of them.

Sam Cash & the Romantic Dogs – what a perfect name for these ascending local roots rockers who are equal parts grit-and-brawn and sweet “aw, shucks” harmonizing. Cash is gearing up to record a new album with Ian Blurton, and he and his band seemed invested in the new material at their March residency at the Cameron, coming straight from an 11-hour day in pre-production.

They warmed up with songs from 2013’s Stand Together, Fall Together, including Remedy, Steal My Car, Fall Together and Talk To Me – all catchy shit. Then they test-drove new material on the Cameron front room’s improved (yet still cozy) stage, debuting the song Carmen and upping the volume and tempo for song Katy Perry.

People trickled out during the second set, but the energy didn’t flag, nor did the half-empty room deter a handful of fans from dancing.

Those with a taste for Heartland music, Elvis Costello and romantic rock should drop in Thursday, when Cash’s father and uncle (the Cash Brothers) join the guys for another revved-up set.

Montrealers AroarA and the Barr Brothers take folk and blues in completely unique directions. The former opened with a too-brief set that didn’t quite live up to their December appearance at Lee’s but still mesmerized. Andrew Whiteman and Ariel Engle, playing with Stills drummer Liam O’Neil, wowed with their guitar prowess and Engle’s powerful pipes. A guest turn by Feist on guitar and backing vocals (despite a bout of laryngitis) enhanced rather than overshadowed.

Any show featuring not one, but two harps is going to be special. And that was only part of the Barr Brothers’ extensive set-up, with organ and pedal steel also supporting frontman Brad Barr‘s guitar work. While he might be the linchpin, harpist/vocalist Sarah Pagé is the secret weapon, bringing texture and colour to their ever-shifting mix of blues, folk and rock.

Colour-wash backlighting and Edison bulbs created an appropriately candlelit, moody backdrop to the heady tunes mostly from the band’s recent Sleeping Operator album. Their proclivity for endless jamming and lack of crowd interaction made for some uneven pacing. The best moments included Joe Grass‘s pedal steel solo in Even The Darkness Has Arms, Barr’s sitar-like slide guitar sounds on Half Crazy and the ’round-one-mic harmonizing on How The Heroine Dies.

It all earned them one of the loudest cheers for an encore in recent memory. As they closed with the stirring Lord, I Just Can’t Keep From Crying, it was clear the Barr Brothers’ music is meant for much bigger stages.