The singular beauty of Kensington Market? Its people

Most of the stores have long-time customers and people who come not just to shop and eat, but to see one another 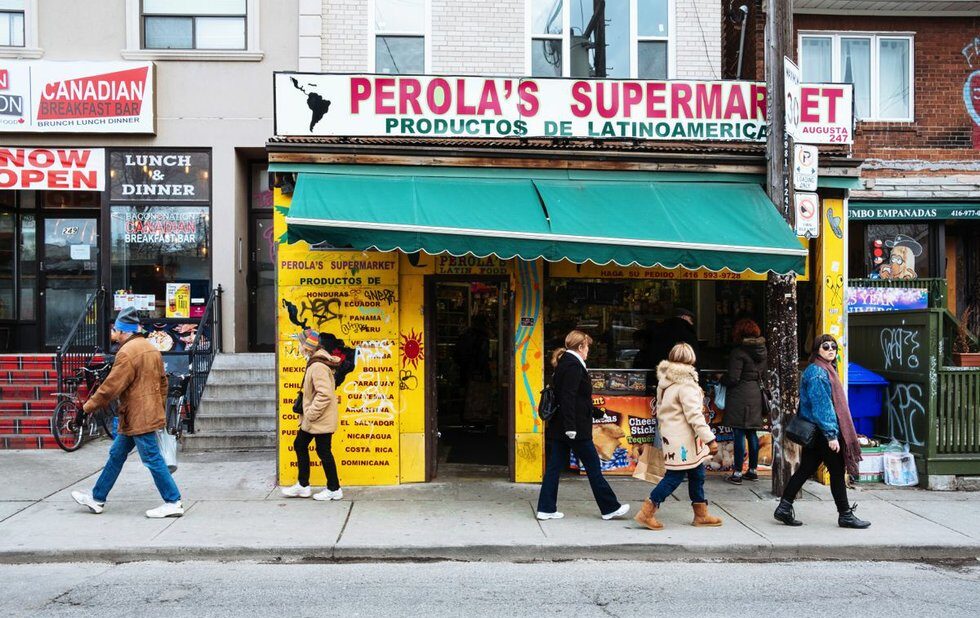 Salvatori (Sam) and Antonina Sanci bought the place in 1931, when it was surrounded by poultry dealers and kosher dairies. Before then, Sam had operated a fruit market at Queen and Bay. In 1937, now in Kensington, he extended the storefront, discreetly placing the outline of a cross on the brickwork as a sign of his religious identity.

Most of the structure’s interior is untouched to this day. David Borg, the fourth generation of the Sanci family, walked me through, pointing out details while sharing his fond memories of Kensington Market.

“It was my great-grandfather who started the business. He just sold bananas. He used to bring his trucks down to the Market and sold them from his truck, and the cops did not let him do that. So he looked for a place and he bought this property in 1922 or 1923. When the retail was booming in the 1940s, we sort of had the corner of the street [Kensington and Baldwin]. I definitively feel part of a bigger community.”

He describes the changes in the community in his lifetime.

“Well, Augusta and Kensington are pretty much two different communities. It is not really one big community it’s kind of split up into smaller sections. I remember when I was walking along Kensington with my grandmother, we always got good deals on everything around. That was a lot of fun!”

Tom’s Place doesn’t set firm prices and is known for its “semi-haggling.” That’s a family tradition started half a century ago, when the store was called William’s Bargain Second Hand Store.

Tom Mihalik, son of the original owner, knows his customers and the Market so well that he draws personal connections the moment you walk in the store. He’s always taken great pride in his family business and his customers, and has never changed the store’s facade. He reminisces about his childhood and significant moments in the business.

“Kensington Market was called the Jewish Market by small entrepreneurs. A lot of those stores were homes, with people living upstairs and doing business downstairs. In 1968, when I came to work for my father, lots of stores were doing all their business outside – food stores, clothing stores, even the chicken stores. Now very few stores are doing business outside, and most have become bigger. There aren’t many living upstairs. The beauty of Kensington was the rents were low, so you could make a living. Plus, you could live upstairs or downstairs, so you could do your business at home. A lot of people who were doing business were very hardworking.”

Perola Supermarket, at 247 Augusta, is now almost half a century old and has become a meeting spot for Toronto’s Latin communities. Sidonio Freitas remembers how his parents started the store and what the Market was like.

“The history of this store goes back to 1967. My father brought in this business. My mother came from Venezuela. The reason they came here was because of the similarity in the language – the Portuguese and the Spanish, at least they can understand each other, as opposed to some places where they would not be able to because they spoke no English at all. We were the only place that had Latin products. Back in the late 60s and early 70s, we had at one time 11 people working full-time in the store, and it was a pretty crazy place back in those days.

“I was five years old at the time, but I remember it was mainly Jews and Portuguese. There was really nobody else at that time. Most of the businesses were Portuguese and Jewish. [There was] so much character about the Market. It is the only open-air market of this type.

“Over the years, fresh blood has been pumped into the Market – younger people, or people with new ideas such as Pedestrian Sundays. A lot is going on here.”

A family-owned business, it sells premium herbs and spices from around the world as well as an assortment of hot sauces, sea salts, teas, coffees, spice blends and other hard-to-find specialty ingredients. Over the years, the owners have extended the building to the edge of the sidewalk, but the glass storefront remains.

Carlos Pereira, the current owner, who immigrated from Portugal and has been in the area for 45 years, reminisces about the Market.

“A lot of friends and a lot of hardships. The Market has changed a lot. Well, see, Kensington Market back in those days, you’d see ducks and chickens running around. The government has cleaned it up, which is a good thing environment- and health-wise. You have to do that, right? I think it is for the good. Everything is so expensive now, but Kensington Market is still one of the best places to come to shop. It was a lot busier – people running everywhere, packed with people.”

The building was owned by David Kwasniewski in 1923 and was then occupied by various families until 1957. Baldwin Kosher Meat Market opened there in 1958 and remained in business until the 1970s.

Yvonne Grant, the current owner, describes the changes over the years.

“When I first started in 1977, the store was on Kensington Avenue. Kensington Market was much different, much different. It had more… It used to have live chickens, more smelly, and the buildings were relatively more dilapidated. It has changed. When I first came here, it was mostly Jewish, and then gradually Portuguese came in, then Jamaicans. I did a feasibility study and found this location. I wanted to make it a little corner of the Caribbean that reminded me of home.”

Most of the stores have long-time customers. People come not just to shop or to eat, but to see one another. The singular beauty of the Market lies in the profound sense that time is meeting humanity in a place where individual memories, desires and hopes can be shared.