Back in the 1980s and 90s, Harold Kandel was a theatregoer both welcomed and feared in the Toronto community.He attended. 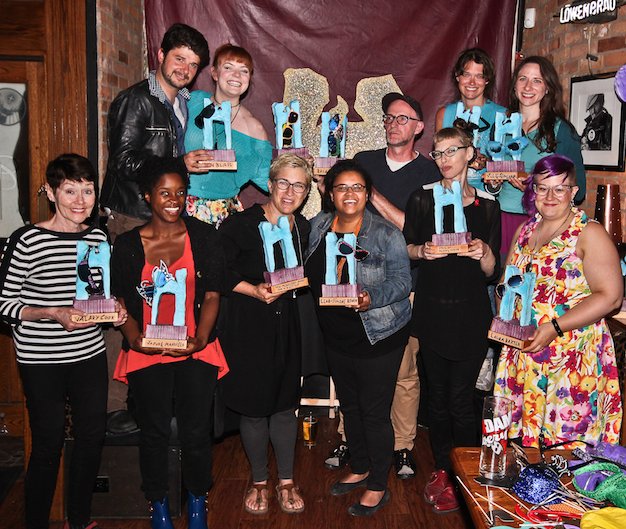 Back in the 1980s and 90s, Harold Kandel was a theatregoer both welcomed and feared in the Toronto community.

He attended most of the productions in town, many of them in the indie world, sitting close to the stage and often carrying countless plastic bags. He never worried about voicing his thoughts about a show during the performance. A heckler as much as a supporter, Harold made some actors nervous when they saw him in the house.

In 1994, a group of 13 artists established the Harold Awards to honour his memory and recognize contributors to the independent theatre scene. In the following years, others were inducted into the founders’ houses, the recipient of one year choosing the inductee for the next.

The actual award changes each year for 2016, it was a big blue H with a pair of sunglasses hanging off it.

The 2016 awards, held at the Cadillac Lounge on Monday (June 6), was a typically raucous evening, with host Kawa Ada acknowledging both the irreverent and the supportive side of Harold. There was some affectionate heckling during the evening, though not enough for Jacoba Knaapen, one of the Harold founders, who did what she could to work the crowd into a jeering mood. Still, she and presenter Michael Wheeler got into a lively back-and-forth as the evening went on (and the liquor flowed?).

One of the most entertaining parts of the Harolds are the lengths to which people will go to get the new Haroldees to the event without letting on why the inductees should be there. Sometimes theyre told that they have to trick someone else to be there to get the award, and then discover that they themselves are in the spotlight.

The best 2016 moment involved a triple cross. Director/playwright and Toronto Arts Council theatre officer Leah-Simone Bowen thought she was in cahoots with Lisa Codrington, last years Haroldee, who was at Shaw and couldnt be there. At Codrington’s suggestion, Bowen suckered Joanna Falck, Shaws literary manager, into attending and then, after Bowen presented the award to Falck, discovered it was really she who was the recipient.

Sometimes people couldnt attend. Performer/educator/dramaturge Tracy Michailidis is currently in New York, but when she was in Toronto last week she had photos taken to confirm that she received her Harold.

Also physically absent was DJ/sound designer/composer LOqenz, who was told by her predecessor, Motion, that she was to do a phoner with the Globe and Mail. When L’Oqenz answered the phone, a cheer went up from the audience and she knew shed been tricked. No way, she said, are you kidding me?

Dramaturge/administrator Mel Hague was involved that night with play readings for Obsidian Theatre, so presenter Susanna Fournier recited a lengthy homage to Hague.

Kat Sandler and Kelly Straughan worked as a tandem team, bringing in another twosome, the Storefront Theatres Benjamin Blais and Claire Burns. A surprised Burns had brought groceries with her, including a good-sized watermelon.

I sat across from writer/performer Rebecca Perry and watched her face as Christopher Wilson, who brought her into the Harold fold, began describing his inductees history. Her jaw kept dropping and her eyes kept getting bigger the revelation was a performance in itself.

The mischief extended to one of the two nods that have become part of the Harolds evening, the Barbara Fingerote Award for Volunteerism. Recipient Valary Cook admitted that she was there because Fingerote told her she needed some volunteers for the event.

The other award is the Ken McDougall Award for Directing, a recognition of an up-and-coming director presented in memory of the late McDougall, sponsored by Platform 9, Buddies in Bad Times and Theatre Passe Muraille. This years recipient was Christine Brubaker.

The awards presentation, which included music by the Uncle Red Foundation, concluded with this years Haroldees being booed and heckled as they made their way to a group photo.