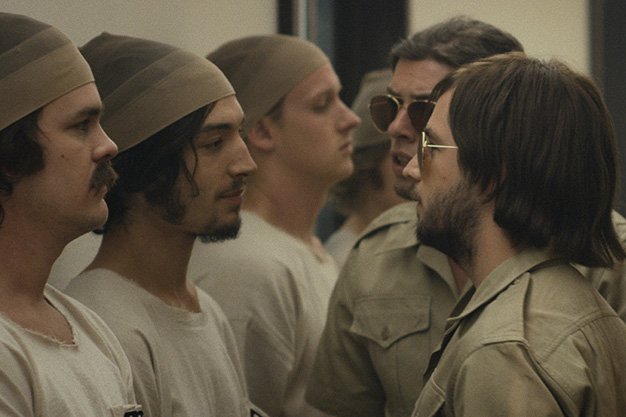 The Stanford Prison Experiment is a dramatization of the infamous study – the one conducted in August 1971 by psychology professor Philip Zimbardo, who randomly assigned 24 college students the roles of prisoners and guards to study prison social dynamics.

The experiment was supposed to run for two weeks. Zimbardo had to shut it down after six days when he realized the sadism and violence had become extreme. (Other sources claim the inhumanity was reached well -before day 6.)

Relying largely on transcripts of Zimbardo’s recordings, director Kyle Patrick Alvarez (C.O.G.) and screenwriter Tim Talbott take a cast of strong young actors – including Michael Angarano, Thomas Mann, Ezra Miller, Tye Sheridan and Moises Arias – and pit them against one another in an escalating battle of wills. It’s paced like a drama but packs the intensity of a thriller, as the tension is compounded both wittingly and unwittingly by -Zimbardo (played with ambiguous -reserve by Billy Crudup) and his team.

We’re outside the experiment, so we can see how terribly wrong things are going Zimbardo, playing warden, is convinced he’s wielding power responsibly. But of course he’d think that. That’s what the experiment proves.