The Strumbellas - HopeSix ShooterFor those who hadn't yet heard of the Strumbellas, the band's first certifiable hit, Spirits, has. 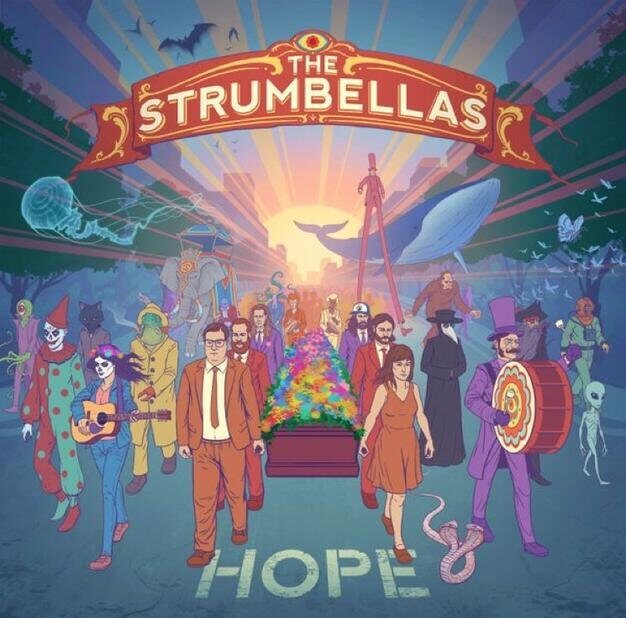 For those who hadn’t yet heard of the Strumbellas, the band’s first certifiable hit, Spirits, has likely been their introduction. Its big – nay, huge – builds, drums augmented by handclaps, rhythmic electric guitar, gang vocals and lyrics that leave you uplifted even though they tackle demons serve as a template for Hope, the band’s third album.

Produced by Dave Schiffman (Johnny Cash, Haim, Weezer), Hope is a clear bid for far broader commercial appeal from the Toronto-via-Lindsay, Ontario, Juno Award-winning six-piece, whose songs have always been hyper-accessible but until now lacked the oomph that big production (literally, bell sounds, if not whistles) has now brought to their folk-pop anthems.

Songwriter/frontman Simon Ward has said that Spirits and the even more dramatic We Don’t Know emulate pop hits by applying the beat drop of, say, Miley Cyrus’s Wrecking Ball to rootsier music. The Strumbellas do this again and again on Hope, knocking out one reassuring motivational anthem after another. On a song-by-song basis, this works – kind of like when you find yourself crying in spite of yourself over a Taylor Swift song.

Yet Ward’s writing – though universal and singalongable – sometimes suffers from vagueness and cliched rhymes. He should have a bit more faith in his audience, because Hope is most interesting when it strays a little from this formula. Rootsy track Dog has a memorable, loose, weaving vocal harmony, while soulful The Hired Band actually features hired hands like horn players Richard Underhill on sax and William Sperandei on trumpet. I Still Make Her Cry is a stark piano ballad.

But perhaps songs you can holler along to on first listen are what the Strumbellas do best. Bouncy, Springsteenesque Young & Wild already seems destined to get fists pumping at festivals.

The Strumbellas play the Phoenix Wednesday (May 4). See listing.