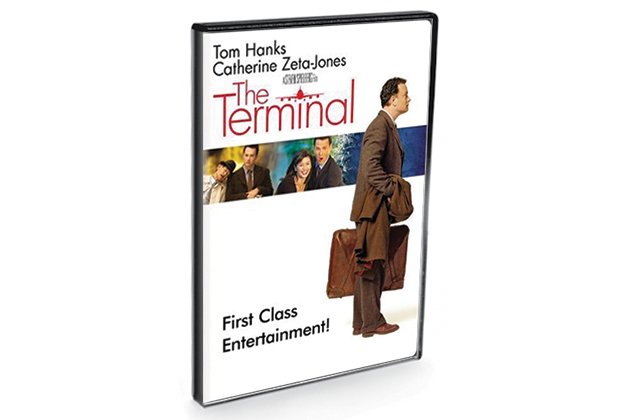 Look closely and you can see traces of silent comedian Buster Keaton and French comic genius Jacques Tati in The Terminal, a thoroughly amiable movie built on a brilliant idea.

When Viktor Navorski (Tom Hanks) arrives in the U.S. from his eastern European country, he discovers that a coup at home has left him stateless. By law, he’s confined to the arrivals lounge until the paperwork gets sorted. Hours turn to months as Viktor settles in, makes friends with various workers, finds a job and starts a tentative relationship with flight attendant Amelia (Catherine Zeta-Jones). All the while, senior security bureaucrat Dixon (Stanley Tucci) schemes to be rid of him.

Viktor is no idiot, and Hanks keeps his physical and verbal comedy this side of buffoonery. Zeta-Jones is surprisingly vulnerable. Tucci avoids villainy to make Dixon merely a rule-bound careerist. The supporting cast get lots of good comic moments, particularly Kumar Pallana as a cranky janitor.

Steven Spielberg dials his tendency toward cloying warm-heartedness down to reasonable levels while keeping things moving and showing off the spectacular set in novel ways.

You get a good look at that set’s construction and the cast in the making-of docs.