The top 5 gaffes in Toronto politics

From Doug Ford rediscovering his family's Jewish roots to John Tory's denial of white privilege, it was an eventful year in political missteps 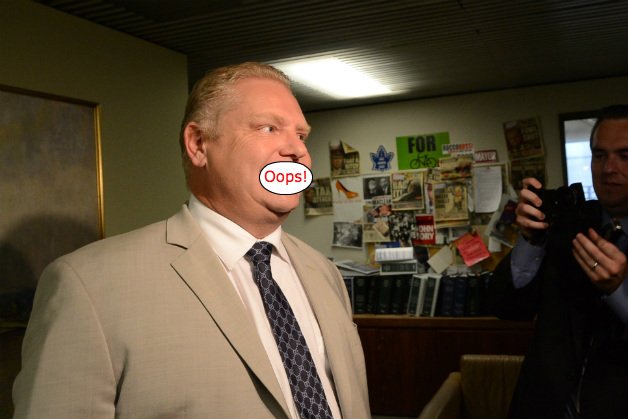 The honour of biggest gaffe of 2014 belongs to Doug Ford, for his disastrously misguided attempt to defend his brother from accusations of anti-Semitism. When outsider candidate Ari Goldkind brought up Rob Ford’s racial slurs during an October 5 mayoral debate, Doug essentially responded by protesting that he pays Jews to do things for him—hackneyed stereotypically Jewish things like acting as his lawyer and doctor, no less!—and no one whose family employs so many Jews could possibly be anti-Semitic.

Needless to say, the crowd at the Anne and Max Tanenbaum Community Hebrew Academy was not pleased, and its loud booing drowned out what was surely going to be an enlightening address from Doug about “My Jewish doctor, my Jewish dentist, my Jewish lawyer, my Jewish accountant…”

The next day he tried to smooth things over by claiming that his wife Karla is Jewish, a hitherto unpublicized fact he conveniently remembered in the middle of a media scrum. Toronto Star reporter Jennifer Pagliaro quickly unearthed immigration records about Karla’s ancestors that cast doubt on the claim however, which prompted an unforgettable television interview in which Karla was obliged to clarify that while she doesn’t, as she mistakenly put it, “practice Jew-dism,” she believed her great grandmother may have been an observant member of the faith. Oy vey.

The head of a campaign war room is supposed to be among a candidate’s most valuable assets an operative who can attack opponents with an aggression that would be unseemly coming from the candidate herself. But Warren Kinsella, Olivia Chow’s backroom lieutenant, became a major liability on August 19 when he sent out a tweet suggesting John Tory’s SmartTrack transit plan was “segregationist” because it bypassed minority neighbourhoods.

Kinsella offered a limp apology, but backlash over the racism accusation continued to grow and Chow tried to distance herself by claiming he was merely a “volunteer” (in fact, he was president of a company that she paid to do media monitoring). Soon after he was forced to step away from her campaign in what proved to be an ugly, public falling out (Kinsella complained Chow’s treatment of him “stunk,” and he sued Tory strategist Nick Kouvalis for gloating about the fracas on Twitter).

Tory insiders have since pointed to the “segregationist” incident as a turning point in the election, saying that at a crucial stage of the campaign it caused Chow, who began the race as the frontrunner, to drop to third behind Tory and Rob Ford. She never recovered.

What makes this blunder unique is that the man who made it maintains it wasn’t a blunder at all. When Tory told reporters after an October 10 debate in the Jane and Finch neighbourhood that he didn’t believe white privilege exists, many saw it as evidence that the moneyed Rogers executive, a veritable walking example of the term, was woefully out of touch with the systemic discrimination facing Toronto’s minority communities.

But while the remark was controversial, it didn’t stop Tory from winning the election and the mayor has since defended his comment (even while acknowledging that some discrimination Torontonians face is systemic). In a recent interview with NOW, he actually framed his refusal to use the term “white privilege” as his way of avoiding controversy. “I try and stay away from phrases that can distract you from the real issue that you’re trying to discuss,” he said.

There are many ways Rob Ford could’ve made this list his lewd comments about Karen Stintz, various alleged misbehaviour documented in police wiretaps, the second crack video. But arguably those are more accurately defined as scandals than they are gaffes, and besides there’s one Rob Ford blooper that stood out for its sheer, mindboggling stupidity.

Sadly, by spring of 2014, we expected the mayor to show up intoxicated at public events, to slyly telegraph homophobia to his bigoted constituency, to embarrass himself on U.S. talk shows. But Ford still managed to shock on April 2 when he was the only council member to vote against two separate motions honouring late South African president Nelson Mandela and commending Canadian Olympians for their performance at the Winter Games. “Astounding,” declared one councillor. “Pretty stupid,” said another.

Even stranger, Ford (who would later admit to sometimes being drunk at City Hall) seemed to have no idea what he had done until half an hour later, when a reporter asked his chief of staff about it. The mayor refused to explain how he had made the mistake, and when reporters sought clarification he stormed out the scrum grumbling, “Forget it, guys.” He also falsely claimed he had asked for a re-vote “immediately,” even though 30 minutes had elapsed before he realized his error. Council eventually agreed to reopen both votes so he could be recorded in the affirmative.

It was nowhere near the career-ending misstep that the police union made it out to be, but Alok Mukherjee’s decision to post an Occupy Wall Street meme on his personal Facebook page earlier this month was a serious unforced error. The police board chair later claimed he was merely trying to start an online conversation, but the meme, which compared American police to ISIS and described cops as “the enemy” was the equivalent of waving a red flag in front of a herd of bulls, especially in the highly politicized context of ongoing contract negotiations between the board and the Toronto police.

The Toronto Police Association tried to play the incident for all it was worth, and called for Mukherjee, who the union opposes for his vocal advocacy of police reforms, to resign. But although he was forced to apologize and agreed to delete his Facebook profile, a chastened Mukherjee appears to have survived the controversy, at least for now. The board decided to take no action against him.

Unfortunately however, the affair has only soured an already acrimonious relationship between the force and its civilian oversight body.