The Tree Of Life 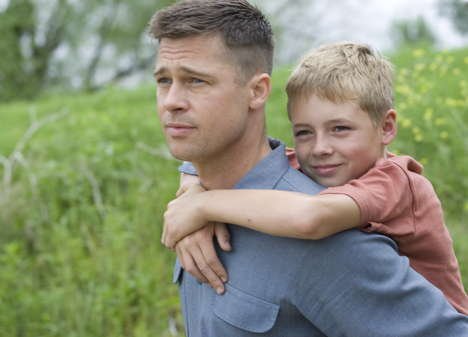 Brad Pitt (left) and Laramie Eppler branch out in rhapsodic Tree Of Life.

Terrence Malick’s The Tree Of Life is a movie, an experience and a goddamned work of art. It perfects the intuitive approach to cinema Malick has been developing for nearly four decades, through Badlands, Days Of Heaven, The Thin Red Line and The New World. It affected me more profoundly than any of those films.

Malick has finally stopped pretending that his movies have ever been about anything other than his own spiritual quest. The Thin Red Line isn’t really about Guadalcanal The New World isn’t about the settling of America by the English. Those stories were just excuses for Malick to meditate on the intrusion of “civilized” man into the natural world, his characters forever ruminating on the violation of Eden in weighty voice-over.

The Tree Of Life is just a story about a family: a domineering father (Brad Pitt), an endlessly patient mother (Jessica Chastain) and their three boys in Waco, Texas, sometime in the 1950s. Most of it is experienced through the wide-open eyes of the oldest boy, Jack (Hunter McCracken), who is about as old as Malick would have been at the time and processes things as profoundly as a budding artist might.

Jack passes through the signature conflicts of boyhood and adolescence in a story that’s less autobiographical than primal. He does things he knows he shouldn’t, swept along by peer pressure and deflected rage at his inability to connect to the father he loves and fears in equal measure.

Malick gives us Jack’s youth as a chaotic swirl of feeling. More than any other film I can remember, The Tree Of Life conveys the horrible, overwhelming immediacy of adolescent emotion. The occasional jumps to cosmic imagery feel entirely right it’s the way a child’s id views the world – explosive and majestic and beyond comprehension – forever raging at the inability to understand the whys and wherefores. Even the scene with the dinosaurs makes sense when you view it through the eyes of a child – or a director obsessed with the divine – wondering whether humans are the only creatures who can know grace.

I don’t expect everyone else to have the same reaction. The audience at a Toronto preview screening earlier this week was split between rapture and walkouts, and the film’s Palme d’Or win at last month’s Cannes Film Festival was met by crabbing from the European press.

The Tree Of Life is a purely subjective experience what you see in it is the only thing that matters. And I saw something wonderful – something beautiful in its inelegance and confusion, something that embraces the awe of adolescence and the loss of innocence in the purest sense of those terms. It’s a rhapsody on the mystery of simply being alive.