The Two Worlds Of Charlie F.

THE TWO WORLDS OF CHARLIE F. by Owen Sheers (Mirvish/Garry McQuinn/Amanda Faber). At the Princess of Wales (300 King West).. 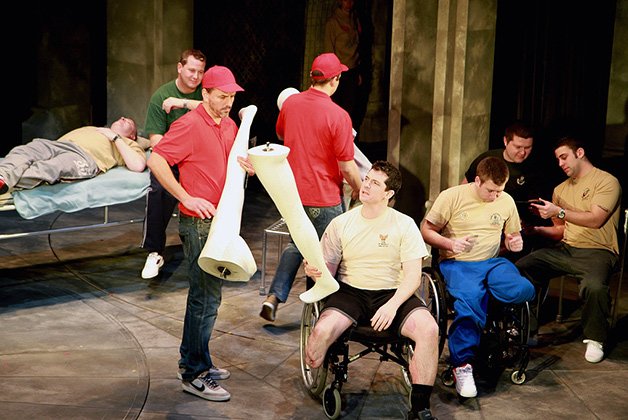 The Two Worlds Of Charlie F. arrives in town about four months late. It would have made a fitting Remembrance Day presentation, when its dramatic shortcomings, uneven acting and earnest confessions might have seemed less blatant than they do in the cold, harsh light of the winter theatre season.

Based on the real-life stories of wounded, injured and sick British war veterans and starring several ex-soldiers (who join professional actors), the show chronicles the experiences of men and women who signed up for the military – interesting how many come from families with a history of service – and then got injured on duty. Some of their wounds are obvious (missing limbs), while others are neurological or psychological.

As with many collectively created works, there are lots of ensemble sequences – some sung, some danced. We learn how they joined up, how they got injured, how they do physio, how they look forward to receiving letters from loved ones.

Anyone who’s seen a war film or doc will be familiar with the drill. The quality varies, and will obviously resonate with vets and their loved ones.

Some sequences work better than others. Whenever writer Owen Sheers lets us get close to a character there’s some payoff. Especially powerful is the story of Lance Corporal Simi Yates (Maurilla Simpson), who was born in Trinidad and, after a visit from the Queen, made it a goal to live in England. In a lovely memory sequence we flash back to Simi’s childhood, with Simpson playing her tough-minded mother and Teri Ann Bobb-Baxter playing the young Simi.

Another strong scene shows what happens when an IED (improvised explosive device) comes in contact with a human body. Sapper John Booth (Tom Colley) strips to his underwear, and a doctor uses a marker to illustrate the damage to his body.

It’s too bad the story of the central character, Corporal Charlie Fowler (Cassidy Little), doesn’t come into focus until midway through the second act. We also never learn if these soldiers’ wounds changed their ideas about war.

And a more artful structure – the show ends abruptly – would have added power to make even the familiar material seem new and urgent.