The Weeknd’s Echoes Of Silence 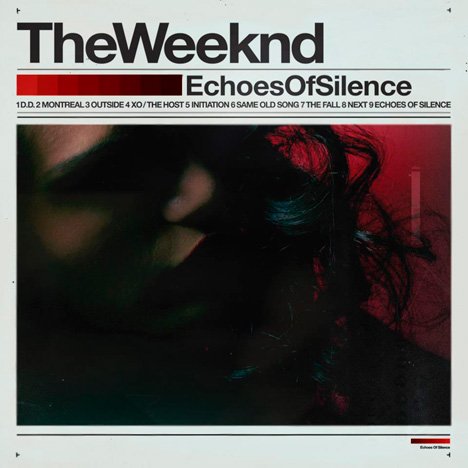 It takes a lot of balls to open up an album (or in this case, mixtape) with a Michael Jackson cover, but Toronto’s R&B revolutionary the Weeknd (aka Abel Tesfaye) did just that, with a reworking of Dirty Diana (re-titled D.D.).

And the gamble pays off. It sounds boldly confident, and fits more smoothly into his rapidly growing catalogue than MJ’s original did on Bad.

Tesfaye has a right to make brash statements like this though – how many other artists in the history of pop music have succeeded in rewriting all the rules of the music industry game in the first year of their career?

If you’re just catching up with the story now, Echoes of Silence is the third mixtape of a trilogy that began with March’s House Of Balloons (currently seen on year-end top ten lists all over the world, including these two), continued with August’s more abstract and introspective Thursday, and concluded late last night with the upload of the impressively assertive Echoes of Silence.

We’re talking about a 21 year old singer who’s released three amazingly strong and uniquely futuristic R&B albums in the first year of his career, without the support of a label, barely any live gigs, and a complete refusal to do any press.

He’s been written about everywhere: as much in hip-hop magazines as indie blogs or established newspapers. He’s been called on to do remixes for Lady Gaga and Florence + the Machine, and sung many of the most memorable hooks on Drake’s chart-topping Take Care album.

His debut gig sold out almost instantly, despite having no established promoter behind it (tickets were sold out of a small clothing store), and press from all over the world reported on it.

No Toronto artist has ever had this insane a rise to fame, and for that matter, can you even name any international stars who have?

Getting back to the music itself, one of the charges often levelled at the Weeknd by indie types is the idea that he’s deliberately trying to make R&B that’s accessible to people who read Pitchfork. However, those people have an inflated sense of the potential advantages of that kind of gesture. If Tesfaye just wanted to sell a lot of records, doing purist straightforward soul pop would make more sense. No, from what we can extrapolate from the limited information available (and a lot of stalking), this blend of R&B and rock is more an honest expression of what growing up in Toronto sounds like.

If you look closely in the background of this video of Montreal noise rock band AIDS Wolf playing a renegade rooftop BBQ during NXNE, you can see Tesfaye and his crew hanging out in the background – this isn’t the kind of thing an urban artist who’s just paying lip service to indie would put himself through.

Echoes sees the Weeknd’s central character realizing that the girls he thought he was playing on House Of Ballons are actually playing him just as much, although lyrically things are vague enough that many other interpretations are valid as well. The mood is still dark, druggy and claustrophobic, but this time Tesfaye is channelling a pain that’s less about cold emptiness than it is about more traditional heartbreak and longing.

No one has made non-stop partying sound so depressing since Lou Reed’s early solo work, and while many may find the oppressive darkness hard to relate to, larger numbers of rabid fans are finding themselves deeply seduced by it.

We get the feeling that much of his game-changing business decisions are coming mainly from a standpoint of inexperience, but that doesn’t make them bad choices. Sure, Tesfaye has burned more than a few music industry bridges already by turning down insane offers, but as his career continues on this trajectory, it’s becoming apparent that when he finally agrees to say yes to something, it’ll be much bigger than he could have asked for if he’d signed the first contract put in front of him.

You can almost see the terror in the eyes of the major labels as they watch an artist like this bypassing all of their infrastructure and building his career on his own terms.

Even if you can’t stand his quivering falsetto and find his lyrics creepy, you still need to pay close attention to what’s happening here.