NOW MagazineNewsThe wheels on this bus are changing lives

The wheels on this bus are changing lives 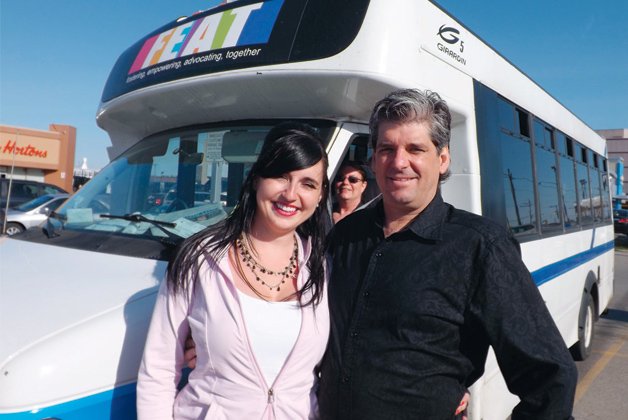 Co-founders Derek Reid and his daughter Jessica outside the F.E.A.T. bus before leaving for Kingston jails.

It only costs $35 to make an inmate’s day, thanks to a program called F.E.A.T.

Fostering, Empowering, Advocating Together has helped more than 400 families, with 200 children, visit their dads or spouses in prisons since 2012.

“We wouldn’t be able to visit him if it wasn’t for this bus,” she says. “We couldn’t afford the $120 it would cost to take a bus and taxi to get there.”

Kids under 18 ride free, and the $35 for adults just covers the price of gas for the bus that ferries families to federal penitentiaries and provincial jails. The bus also makes runs to the Central East Correctional Centre in Lindsay to visit those held for immigration offences and facing deportation.

“A lot of people want to see their loved ones before they get deported,” says program co-founder Jessica Reid. “Its always hard for the families and the kids to see their dads for last time.”

The Etobicoke-based grassroots operation is a first in Canada. Reid says the program helps kids overcome the disconnection from parents and the negative cycle that separation can sometimes breed.

“It’s the children of inmates who are facing economic hardship, social stigma, isolation and feelings of abandonment,” she says.

F.E.A.T. caters to both male and female inmates, but, Reid says there has been a “lack of demand” to visit female prisoners so far.

On any given Saturday, F.E.A.T.’s 24-seat bus picks up families at five Toronto locations and drives to six federal institutions in the Kingston area. On Sundays families visit their loved ones in provincial jails.

The passengers reflect the findings of a report issued last June by Canada’s correctional investigator, Howard Sapers, showing that some groups are disproportionately over-represented in federal penitentiaries, and the number of inmates from these groups is growing at an alarming rate.

Sapers’s report notes that in the past 10 years the aboriginal incarcerated population increased by 46.4 per cent, while visible minority groups including blacks, Asian and Hispanics increased by almost 75 per cent.

“These are disturbing trends that raise important questions about equality and our justice system in Canada,” he writes.

On the Saturday before Mother’s Day the bus carries seven kids and 15 women from Toronto on the 264-kilometre trip east on Highway 401.

Debbie the driver picks up families in Pickering, Ajax, Whitby and Oshawa before pulling into Kingston around noon. She and Reid are the only paid staff, their wages funded by a grant and donations.

Visitors are dropped off at Millhaven, Bath, Collins Bay, Frontenac, Joyceville and Pittsburgh, some of Canada’s most notorious institutions.

Robert and his wife, Delcia, are on the bus to visit their son in Bath. Delcia says she’s happy to celebrate Mother’s Day in jail.

“This service is inexpensive, and we can keep in contact with him on a regular basis,” Robert says.

Steff and her two children have been travelling weekly to visit her husband, who will be released in December after serving five years.

“My husband’s relationship with the children has greatly improved,” she says. “This time together has made our relationship even stronger, and we now look forward to the visits.”

Reid co-founded the program with her father, Derek Reid. They wouldn’t have a relationship if Jessica hadn’t found him three years ago – Derek was unaware that his former university girlfriend was pregnant with his daughter when they broke up more than two decades ago. Jessica found Derek, and they decided to form F.E.A.T. Jessica knew how much it meant to have her father in her life.

“Some of the men we see have little to look forward to except for visits from their families,” says Derek. “It really hits home for some of them when they see their children.”

For one woman, having more contact with her father when he was serving 10 years would have made all the difference. Laura says not being able to visit her dad while she was growing up left her traumatized.

“It still hurts me to this day that I was not able to see my father on so many special days,” Laura says. “He was away for most of the milestones in my life.”

The group is gearing up for increased visits as more inmates are added at the Toronto South Detention Centre in Etobicoke, which will eventually house 1,650 prisoners.

The program, which raises money through donations, grants, a gala event and the sale of buttons at an annual motorcycle rally in Port Dover, also offers free mentorship and after-school programming in the Jane and Finch area for children with incarcerated parents.

From June 7 to 15, Jessica will walk 260 kms from Toronto to the Collins Bay Institution, where she will mark Father’s Day. Donations or pledges can be made at featforchildren.org.

Some people in this article asked that their last names not be published to protect the identity of their children and spouses.