THE WIZARD OF OZ adapted by Andrew Lloyd Webber and Jeremy Sams from the movie, with music and lyrics by. 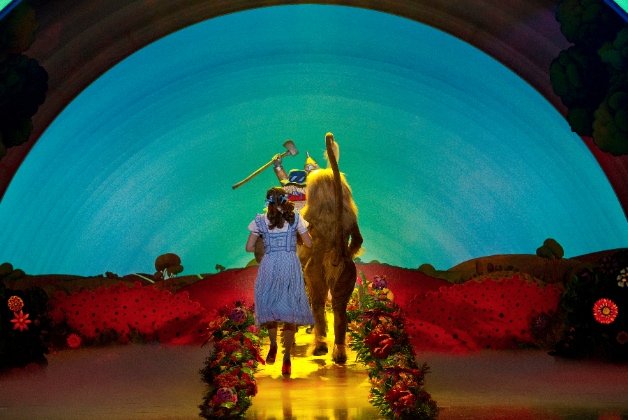 Despite flying monkeys and witches and the image of a farm that’s uprooted and catapulted over the rainbow, The Wizard Of Oz, Andrew Lloyd Webber and director Jeremy Sams‘s adaptation of the beloved movie, remains mostly earthbound.

That’s a shame, because there’s plenty of magic in the story of Dorothy (Danielle Wade), the Kansas girl who recognizes the importance of home after travelling to the colourful world of Oz, where she and her dog meet a trio of anthropomorphized pals.

But things that work well onscreen twirling cyclones, fields of poppies and the Wicked Witch of the West’s fortress of a castle don’t necessarily translate onto the live stage. So it’s no surprise that set and costume designer Robert Jones resorts to projecting images onto screens to evoke many things.

This adaptation has another problem. Despite all the reality TV show hype surrounding the casting of the lead, the role isn’t that compelling. Sure, Dorothy gets a new Lloyd Webber/Tim Rice song called Nobody Understands Me the lyrics are just as banal and on-the-nose as that title suggests and endless reprises of Over The Rainbow, but there’s no theatre equivalent of the camera close-up to show you Judy Garland’s doe eyes and trembling lips.

Wade’s performance is competent, but she’s pitched her speaking voice screechingly high, making her opening night jitters even more evident. She doesn’t seem comfortable onstage – or to be having much fun. But her singing voice is big and brassy, and she got a big round of applause after hitting, and sustaining, the final money note of the show’s most famous number.

Thankfully, director Sams has surrounded her with first-rate talent, like Lisa Horner, who manages to make the WWotW’s familiar lines feel fresh and – is it possible? – serious, and Cedric Smith, whose speeches as Professor Marvel and the Wizard could get ovations at Stratford. The two also sell their new numbers which aren’t in the same league as the original ones by Harold Arlen and E.Y. Harburg with panache.

Jamie McKnight, Mike Jackson and Lee MacDougall do excellent work as the Scarecrow, Tin Man and Lion, and have fun with some playful additions to the script look for the “friend of Dorothy” reference by the Lion (complete with swishy tail) and a snappy comeback by the first two when Dorothy says she’ll miss the Scarecrow most of all.

Arlene Phillips‘s choreography is merely serviceable – I’m still not sure what to make of the Russian-themed number by the Witches’ drones. But there’s lots of eye candy in the costumes, sometimes literally the witches’ twirly wigs resemble Hershey kisses.

I’m recommending the show. Wade will likely grow into her ruby slippers as the run progresses. And even if the material makes you crave the original, the show is a harmless bit of fluff. Plus Toto is adorable.