Did you love all those mid-60s American rock and roll bands? Turns out the Byrds, the Association, even the Beach Boys weren’t playing their own instruments. 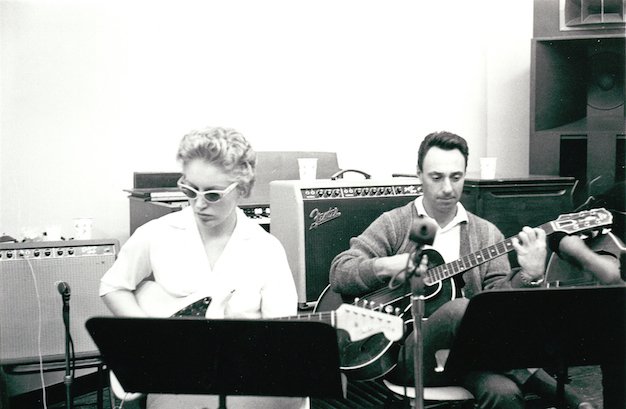 Carol Kaye and Bill Pitman get their due in The Wrecking Crew.

Did you love all those mid-60s American rock and roll bands? Turns out the Byrds, the Association, even the Beach Boys weren’t playing their own instruments.

That’s one of the revelations in The Wrecking Crew, a film about the backup musicians who were key to the hit records cranked out of Los Angeles. Director Denny Tedesco reunites five of them and finds a ton of archival footage to tell the story.

It’s a variation on the The Funk Brothers and the Oscar-winning 20 Feet From Stardom, but can’t quite duplicate those cinematic feats. It lacks the political sinew of 20 Feet and can’t, like The Funk Brothers, make the claim that one session group dominated the scene. By the time Tedesco name-checks multiple bass players, guitarists and drummers, it’s not clear who the Wrecking Crew actually is.

But the doc does have its own virtues. Girls Rock Camp grads will love bassist Carol Kaye, who laid down the bass line for Sonny and Cher’s The Beat Goes On and other tracks in ways that define the songs. Tedesco’s guitarist dad, Tommy – seen in interviews recorded else-where and the film’s inspiration – is a great character. And if you know the tunes, you’ll love this.

Given the fact that few of the players, though well paid, got actual credit on the LPs, the issue of how fans were fooled becomes an important one. For the (ahem) record, some bands were pissed that session players took over, but Brian Wilson wanted them on Good Vibrations because he demanded only the best.