Uncle Tetsu’s has a third cafe on the way 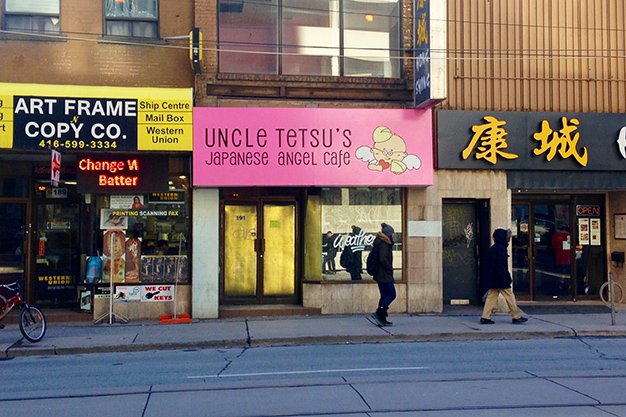 Signs are already up for Uncle Tetsu's Japanese Angel Cafe, which is set to open in March.

The legendary lineups may have finally cooled off in front of Uncle Tetsu’s (and its matcha-obsessed twin) at Bay and Dundas, but the Japanese cheesecake cafe that took Toronto by storm last year is just getting warmed up. Looks like a third location is in the works: A sign went up this week for Uncle Tetsu’s Japanese Angel Cafe just down the street (191 Dundas West, at Elm – the former home of Print Zone).

Staff working at the original Uncle Tetsu’s told NOW the new location is slated to open in March, and will feature a seating area where guests can dig into their sweet treats (both of the current cafes are takeout-only).

The name is a reference to a rarely-available signature Tetsu’s item, “angel hats” – miniature dome-shaped cheesecakes. “The angel hat will be available, and (the new cafe’s opening will be) considered to be the official debut of it, because it has only been available in limited quantities so far,” Luke Hobbs, a rep for Uncle Tetsu’s, writes via email. In addition, hot food items are in the works, introducing new Japanese food that Hobbs says are currently unavailable in Toronto.

The atmosphere, meanwhile, will make for a more immersive experience: A stage will be part of the new decor, and Hobbs says the staff will be known as “angels”, “though they will all look a little different than perhaps your image of angels”. We’re not sure what that will look like, but have a strong hunch there will be a line out the door for it nonetheless.