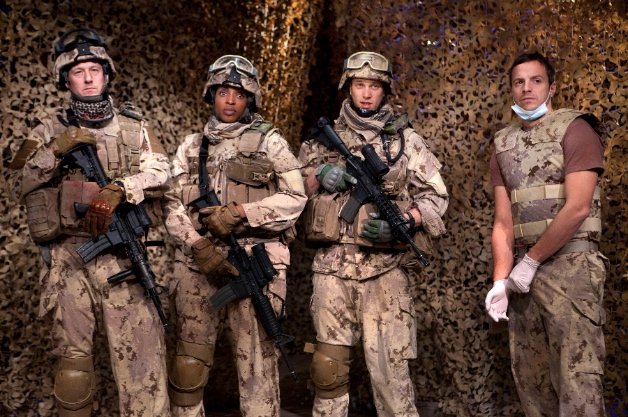 War is hell. We’re reminded of that truism every time we read a newspaper’s headlines or watch a TV newscast.

From that point of view, the theme of Hannah Moscovitch’s latest play, This Is War, is made clear early on. Even some of its narrative, which deals with the events and aftermath of a 2008 Canadian military mission in Afghanistan, has a predictable feel.

What’s special about This Is War is the way the talented Moscovitch spins the tale, blending journalistic interviews and in-the-moment scenes involving a quartet of characters, both before and after the chilling joint op at the play’s centre.

The four are a young private, Jonny (Ian Lake) a medic, Chris (Sergio Di Zio) a master corporal, Tanya, one of the few women in the unit (Lisa Berry) and their captain, Stephen (Ari Cohen).

This is a play about secrets and lies. Actions and desires sometimes hidden from the Canadian public fester and erupt in an ugly fashion. It’s clear that the soldiers are wary of the interviewer – in these scenes they stare out at the audience, as if we’re asking the questions – and are careful only to talk in the most general terms about tense points or even deny knowledge of contentious events.

Moscovitch takes us back and forth in time, replaying certain scenes whose repetition provides another layer about what’s actually going on. It’s a clever device, hard to pull off at times, but director Richard Rose knows how to make the action flow through the set’s primary acting space and secondary passageways so that we’re clear whose perspective is being revealed at any moment.

The world he sets up is intentionally claustrophobic. The Extra Space has never seemed so confining, with Camellia Koo’s camouflage netting cocooning the audience, Rebecca Picherack’s lighting helping define whose point of view we’re witnessing and Thomas Ryder Payne’s soundscape of gunfire and moans hitting us from the moment we enter the theatre.

Add the fights and the sex that take place within inches of the first row of viewers and you feel like you’re in the middle of the action. You can understand how shell shock and PTSD are part of these people’s lives.

There are lots of fights and lots of sex, the former not just on the battlefield and the latter a means of distraction from stress as well as for pleasure. This is an intense production, both in its staging and in the way it deals with the loss of innocent lives and the problem of living with such memories.

The playwright gives each of the characters moments of compassion as well as callousness, though not all the soldiers are sufficiently developed to make you care about them.

Lake’s naive Jonny, infatuated with the older Tanya, offers a remarkable contrast between the focused, quick-trigger newbie and the injured vet, empty-eyed and slightly off-centre in his responses to the interviewer.

Cohen’s captain portrays himself as the company dad, continually saying he’s all right and taking care of his unit, but realizing too late the tragedy he’s helped create.

It’s Di Zio’s medic who is the emotional centre of the story, offering comfort – physical, psychological, emotional – to those around him but unable to deal with every “stress injury.”

This Is War may not tell you a new tale but the storytelling itself is often intelligent and sharp.