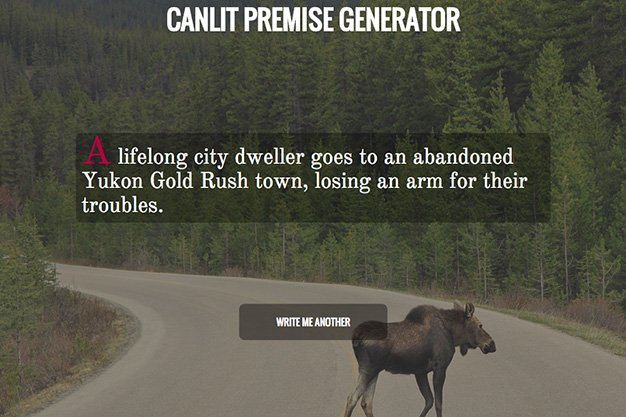 Rick the Temp smuggles rum which results in the death of half of the Tragically Hip.

A young couple live a metaphor, discovering that wilderness can never be really tamed.

Has Alice Munro gone mad with power? Or did this year’s Canada Reads jury forget to shortlist some of the more daring pieces of Canadian literature?

Neither. These imagined storylines are the brainchild of Adam Brady, a web developer in training and creator of the CanLit Generator. Pairing plots with punchlines, it automatically creates non-sensical but all-too-likely premises for Canadian books.

Brady came up with the concept as a student at HackerYou, a nine-week bootcamp that trains individuals to become proficient in coding for web development. After coming up with the concept, he reached out to friends Paul Fowler and Chuck Kotowych to come up with storylines just begging to be written.

One could easily think the project derides the genre, but Brady is quick to point out that passion is at the heart of this initiative.

“[The creators] all come from a place of very, very deep love for Canadian literature,” he says.

The platform works by syntactically breaking up a series of very Canadian phrases and pairing them into non-sequiturs. But much like the New York Times haikus, it’s difficult to not imbue a sense of idiot savant genius into them. If you summed up a novel by a new Canadian author by saying “A statue of Louis Riel crosses the Rockies to escape the draft,” people might believe you.

“As with any genre, there’s a set of conventions that are kind of particular to Canadian literature,” Brady says. “And they were definitely ready to be poked fun at.”

But Brady thinks it goes deeper than merely playing with form and convention. The project itself, he argues, taps into what it means to be Canadian.

“I think that’s definitely part of our national identity: being able to poke fun at ourselves is definitely a thing we do very well as Canadians.”

And so far, the response as been warm and enthusiastic, with fans sending in submissions of their own, hoping to transform this from a one-off school project into the very type of plotline the generator itself might have come up with.

While the idea for the project may seem simple enough, it takes skill that goes beyond JavaScript.

“There’s probably about 9 hours’ worth of work to date doing the actual coding,” Brady says. “And a whole lifetime of reading and taking in Canadian literature for the subject matter.”