NOW MagazineThis sud’s for you: the handy guide to liquid soap

This sud’s for you: the handy guide to liquid soap

Don't let a sticky subway pole or sneezy co-worker scare you into washing with antibacterial toxins. Health authorities say all. 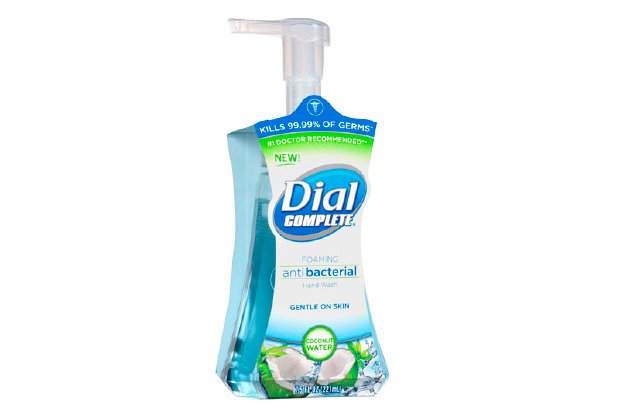 Don’t let a sticky subway pole or sneezy co-worker scare you into washing with antibacterial toxins. Health authorities say all you need is plain soap and water. But is your liquid hand soap all it’s frothed up to be?

Dial has some serious chutzpah to market “new!” antibacterial soap when the feds are poised to declare the triclosan in it an official eco-toxin. Plus the U.S. EPA recently warned soap makers they have to prove this endocrine disruptor safe and effective – or get rid of it by 2016. Considering triclosan doesn’t even bust cold and flu viruses and both brands contain controversial preservatives, best to put these suds down. $4.29/221 ml.

These “people against dirty” win fans with their slick packaging and are cleaner than most big-name brands like paraben-laced Jergens, formaldehyde-releasing Softsoap or even Dial Naturals. But I wouldn’t recommend them for sensitive skin or the chemically sensitive. They use irritating sodium lauryl sulfate, methylisothiazolinone and methylchloroisothiazolinone. Their synthetic scent is free of phthalates and cancer-linked ingredients, but it’s still seriously overwhelming for anyone with fragrance sensitivities. Thankfully they dropped cocomide DEA now that it has to come with a cancer warning in California. $4.50/354 ml.

If you’re looking for a “pretty” bottle with natural ingredients for a decent price, you may already own this bestseller. It’s now NSF-certified to be 70 per cent organic (mostly because of its organic aloe juice base) and is free of fake scents, phthalates, parabens and other Mean 15 ingredients (see ecoholic.ca/mean15). However, the essential-oil-derived limonene/linalool and sodium benzoate preservatives can be irritating to some. GMO-free though not gluten-free. Sadly, no refills available, but bottle is made of 100 per cent recycled materials. $3.99/355 ml.

Finally, a simple certified organic castile-type soap that folds in local ingredients. (Dr. Bronner’s and Val’s offer entirely organic castiles, too, they’re just not local.) This gentle latherer is made with cold-pressed, Quebec-grown organic sunflower oil rich in omega-3s and blended with saponified organic coconut oil. I use this concentrate for washing hands (dilute it in a dispenser), dishes, floors, you name it. Don’t get thrown off by confusing Ecocert labelling that says it’s only 30 per cent organic – all ingredients are organic except water. Comes unscented or with organic essential oils. $12.99/495 ml.

Ask for natural makeup at a mainstream beauty bar and well-meaning clerks will often point you to Tarte.

The company, after all, has trademarked its slogan, “High-performance naturals.” Its stuff is free of parabens and phthalates, which is important, but with the words “natural” and “eco-friendly” in your branding, you really shouldn’t be pumping products full of petrochemicals or eco-toxic cyclopentasiloxane.

Tarte may be a little safer than run-of-the-mill drugstore/department store brands, but the company is definitely stretching its green cred.

Medical scientists are realizing we’ve surrounded ourselves with more neurologically damaging chemicals than we previously thought.

Turns out the number of industrial chems now recognized as causing ADHD, autism, dyslexia and other cognitive impairments has doubled over the last seven years, according to research published in the March edition of The Lancet Neurology this month. Now on the neurotoxicant hit list: fluoride, PBDE flame retardants, PERC dry cleaning fluid and a few more pesticides.

And it’s affecting our livelihood, too.

The article points out that some of the irreversible impacts, including drops in IQ, come with financial blow-back: every decrease in IQ point translates to an average loss of $18,000 in lifetime earnings.

How do we put the brakes on this “pandemic”?

The authors say we need to legally mandate testing of all existing industrial chems and pesticides in use, and start mandatory pre-market screening on all new chems as a precautionary approach. They also recommend an international research agency on neurotoxins like the one for cancer.

They’re part of a growing chorus of environmental health advocates calling for far more comprehensive oversight of chemicals. Last year the World Health Organization and UN called for more systemic screening for endocrine-disrupting chems in the face of a “global threat.”

This after a joint report by the two bodies laid out proof that chemicals are triggering a rise not only in cancers, but obesity, diabetes, infertility, thyroid problems and birth defects.

The feds will assure you they’re already in the middle of reassessing a couple hundred priority chemicals, but a recent legal challenge by enviro orgs reveals some dangerous foot-dragging behind the scenes.

Last summer, the David Suzuki Foundation and Equiterre sued the government for refusing to evaluate hundreds of pesticide products that contain 29 active ingredients banned in the EU but still allowed on Canadian crops.

Earlier this month the feds vowed to do a historic special review of those very pesticides, chems linked to neurological disorders, cancer, bee deaths and more.

Ecojustice lawyer Lara Tessaro said at the time, “Going forward, we hope that the government will start taking seriously its duties to protect Canadians’ health and environment from exposure to harmful toxic substances.”