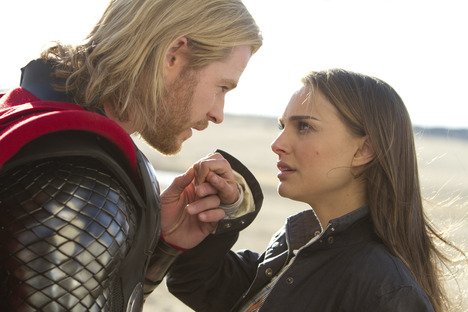 Get set to Marvel over Chris Hemsworth and Natalie Portman.

Get set to Marvel over Chris Hemsworth and Natalie Portman.

It’s hard to argue for a Thor movie – he’s one of the least interesting characters in the Marvel universe. But that just makes Kenneth Branagh’s entertaining adventure movie a pleasant surprise.

Thor takes a potentially ridiculous comic-book character – the beefy but well-spoken God of Thunder, son of Odin and sworn defender of our earthly realm – and slots him nicely into the ongoing cinematic version of the Marvel Comics saga, where he can await the assembly of the Avengers alongside Iron Man and the Hulk.

The light-hearted script finds the angry young god (Chris Hemsworth) exiled by his father (Anthony Hopkins) from heavenly Asgard and forced to knock around New Mexico with skeptical mortals Natalie Portman, Kat Dennings and Stellan Skarsgård until he learns the true meaning of heroism. Meanwhile, his brother Loki (Tom Hiddleston, director Branagh’s co-star in the Wallander mysteries) works to usurp the celestial throne with the help of the sinister Frost Giants.

That sounds a lot heavier than it plays, thanks largely to engaging performances by Hemsworth and Portman, whom Branagh encourages to find the inherent humour and humanity in each situation.

Flashy digital acrobatics do kinda take over in the last reel, but that’s a standard complaint about superhero movies these days. And here’s another one: the post-production 3-D adds nothing. See it flat if you can.